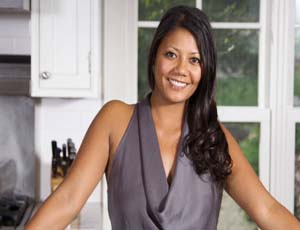 Since reuniting with her birth mother at 19, Marja Vongerichten, who was born to a Korean mother and African American father, has been exploring the food of her native country. She now shares that journey with the public as host of PBS’ Kimchi Chronicles and author of the accompanying cookbook, Kimchi Chronicles: Korean Cooking for an American Kitchen (Rodale Books; $32.50).

BlackEnterprise.com caught up with Vongerichten to talk about fusing cultural influences and how Korean cuisine is food for the soul.

You’ve been cooking since you were 12?

My father was the cook in the family. So I would always watch him. My idea of cooking back then was the box muffin mix. It would turn out like lead but my parents were very encouraging–I could make super terrible breakfast and they’d still encourage me to try to make lunch. Eventually I became really, really good just by experimenting. My parents would let me get whatever I wanted at the supermarket and I always cooked for the family.

Did you ever think you’d end up doing it professionally?

I actually was debating whether to go to the Peace Corps, Fisk University, or start a catering business when I was 18. I decided to go off to college, but I did always want to have a catering business. I never thought of having a restaurant or being a chef. I just wanted to make food and serve it to people.

As a home cook, especially one married to a famous restaurateur, Jean-Georges Vongerichten, was the idea of hosting a cooking show intimidating?

Yeah, those thoughts did creep up in my mind. And I think it was more so what people were going to say: ‘Oh yeah, she’s the wife of a chef. She thinks she can cook.’ But I just do what I do. I don’t profess to be the master of anything. I just do what I know best. And I’m pretty good at it.

For your whole childhood, you were exposed to only one side of your heritage. How did that affect you growing up?

I always felt like I related more to my black side than my Korean side because that’s all I knew growing up. But going back and visiting and also doing this in-depth look at Korea to shoot the show really gave me a knowledge of the culture, and things made sense finally. Then I was able to feel 100% a part of the Korean culture too. I don’t like to say I’m half and half. I like to say I’m 100% and 100%.

What have you learned about Korean culture through the food?

I’ve learned how similar we all are as human beings. We all have the same values, the same wants, the same loves. It’s just packaged differently; the ingredients are different. I’ve learned that Koreans are very tenacious and strong people, and it reminded me a lot of my African American family and what we went through and all the hardships. I really was blown away by the similarities in our cultures.

How do those similarities extend to the food?

I always refer to Korean food as soul food. Korea is a country with a really painful history. It’s gone through centuries of abuse. And our food reflects that. It’s cheap cuts of meat, it’s root vegetables that need to be cooked a long time. The same for soul food. And when you go to a Korean person’s house, they always ask, ‘Have you eaten?’ just like most African American families. That’s the way we show our love.

Vongerichten, along with other food industry professionals, will be profiled on BlackEnterprise.com throughout this month, in conjunction with Black Enterprise magazine’s November 2011 “A Passion for Foodâ€ issue.