How I Landed A Full-Time Job In Media 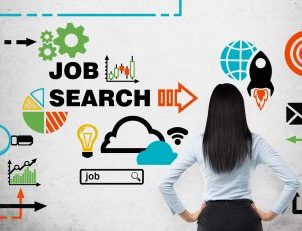 Looking for a job isn’t fun or easy–especially in media or journalism. In addition to having a degree and relevant experience, it takes lots of networking, follow-up emails, and patience to secure a job.Â On top of that, many recruiters are looking for someone with social media skills or a substantial following, even if social media skills are not part of the job description. Plus, you deal with constant rejection while you’re dragged on an emotional roller coaster.

I often compare the job hunt to an unhealthy relationship or an emotional roller coaster, which leaves you feeling high when you find an open position you absolutely love, get a call back, or ace an interview. However, that moment of optimism can quickly be shot down, if you don’t get enough or any responses from the companies you’re applying to. After not hearing back from the numerous companies you’ve applied to, or being told that you are no longer being considered for the position, you are then left feeling low.

I know firsthand how stressful, frustrating, and draining this process can be; it took me three years to finally land a full-time position in media, while I was working as a full-time contractor (with no benefits) from 2013 to 2016. Â At certain points during that time period, I went months without getting a response from the media outlets I applied to, which is extremely discouraging, to say the least. As a result, there were times when I had to take long breaks from the jobÂ hunt just for my own mental health and well-being.

Although I’m no expert in job recruitment, that three-year process taught me a lot about looking for work in journalism. Here are some of the tips, strategies, and advice that helped me land my current gig as the Associate Digital Editor at Black Enterprise.

Create Various Versions of Your Resume

I created a few different resumes that emphasized different skill-sets, depending on the type of position and/or outlet I was applying to.

For example, when applying for corporate news outlets, I would highlight my breaking news writing skills and news production experience. When applying for radio gigs, I would naturally emphasize on the work and accomplishments I achieved while being an executive producer at a local, weekly radio talk show. Meanwhile, when applying for aÂ writing position, I would position my work as a reporter in the “Skills” section at the top of my resume.

I would also delete irrelevant experience, so that my resume would be tailored for that position. For example,Â  if I were applying for a production position at NBC, I would remove my work as a TV correspondent. This is because, in my experience,Â  I’ve found that some corporate media companies are hesitant to hire candidates with on-air experience and aspirations.

Invest in Your Resume

In 2015, I Â started using a really cool resume builder website called LiveCareer. Although the service comes with a fee, my callback rate jumped by about 75%, after I began using it. As a result, I went from getting one or two callbacks, to getting callbacks from MSNBC, Mic, Sirius Radio, CNN, ABC, Fox Radio, and so on, once I started using this tool.

Here in New York City, I am a paid member of the New York Press Club and New York Association of Black Journalists. NABJ, Minorities in Media, and New York Women in Communications, Inc. are also great resources for job-seekers.

Even if you’re not a paid member, you should actively follow local organizations like these and go to any and all of their free events. In the past, I landed interviews and locked down jobs by going to their events.

Have you considered entrepreneurial work, or using your creative talent to produce other streams of revenue? While working as an independent contractor, I was able to actively work on my radio show and start working for a local TV show. Even if a project doesn’t pay much or at all, take advantage of any opportunity that you may have to build your skill-set and network.

The 3 Ps: Prayer, Patience, and Practice

Prayer is the thing that got me through my dry period. I really had to trust and believe God, while I worked at a job that I could not stand for three years. During that time, my faith grew, I learned humility and to be grateful, and I worked on multiple independent projects.