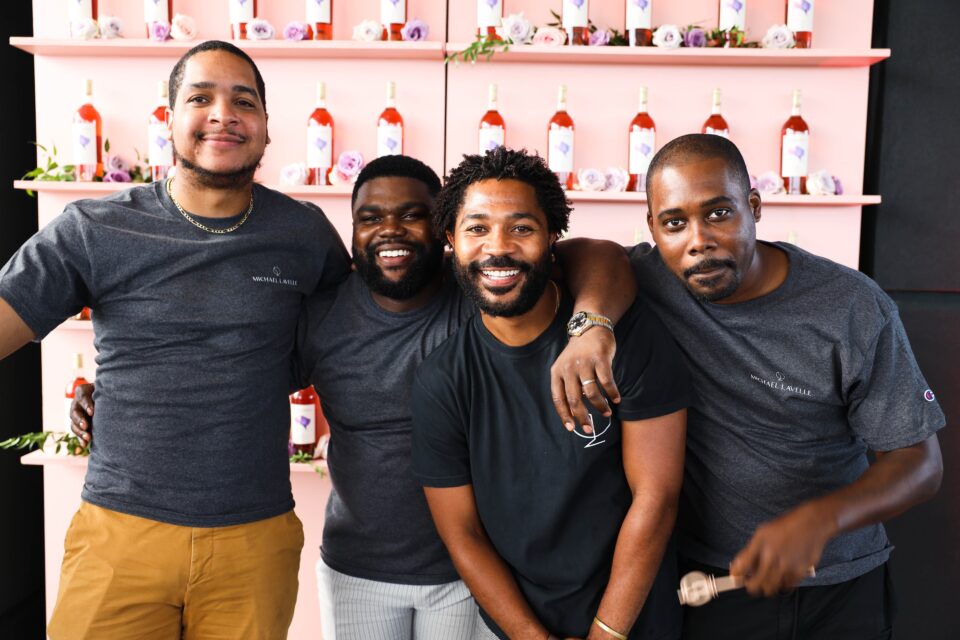 What started out as a genuine passion and curiosity about wine and its rich history has turned into a new wine label curated to enhance and educate the Black community.

Howard University alum Aaron “Michael” Coad and Terrence “Lavelle” Low founded Michael Lavelle Wines, a luxury private wine label, on Juneteenth of 2020 after recognizing a void in culturally relevant wine craftsmanship offered to millennials and minority audiences. Aiming to change the way people of color experience wine, the founders partnered with Sommelier Devin Kennedy and Brandon Crump, a client service and operations specialist. Now, the four friends are working to disrupt the predominantly white-owned industry that, according to Bloomberg, had less than 1 percent of Black ownership (out of 8,000 winemakers, negociants, and brand owners) in the U.S. in 2020.

“Out of passionate curiosity, we started to dive into wine and its rich history and noticed that our peer group’s appreciation for wine was growing, but there was also a lack of education around its offerings,” says Low, who serves as Head of House at Michael Lavelle Wines. In comparison to other spirits like tequila or vodka, “there wasn’t a real understanding of what premium wine actually is,” he told BLACK ENTERPRISE.

In turn, the Chicago native and his three business partners developed a spirits brand fused with art and culture designed to give Black millennials an unmatched wine experience.

“The Black community has always been pushed a very specific type of wine, and we realize we need to change that,” says Crump, Head of Operations at Michael Lavelle Wines. “We’ve always been marketed a sweet wine,” he added, emphasizing their mission to expose the Black community to a variety of quality wines.

“We have a big ethos on education,” says Kennedy, a licensed bartender and mixologist who serves as Head Sommelier. “[We’re also] trying to break the mold of what’s expected from a wine brand. Most people expect you to come out with a Chardonnay Cabernet right away because those are the most popular grapes.” Rather, Michael Lavelle’s first varietal was Iris Rosé, which was created from a blend of Cabernet and Pinot Grigio grapes. Kennedy describes their signature Rosé as smooth with crisp flavors and fresh fruit aromas, including wild cherry, strawberry, and watermelon.

“It’s in a kind of Provence style, which is the most classic style of Rosé, which is kind of big fruit on an opening note, but a really clean and dry finish, high bits of acidity, and then very low tannins in a medium alcohol profile,” he says. The red and tropical fruits “brightened [and] refresh on the nose, and on the opening palette, and then they kind of go into a nice little story and they kind of fade off into this really crisp finish,” he said. He added that the Iris Rosé goes well with all types of food, primarily white fish, poultry, rice dishes, salads, and pasta dishes.

In addition to its distinct taste, Crump notes that, unlike other wine labels, Michael Lavelle is owned by four millennial Black men. “You don’t see that,” he told BE, adding that their company’s mission is to “enhance our community’s palette.”

Low says Michael Lavelle was intentional about making quality wine accessible for communities of color. That’s why Crump says they are proud that their wine is available in local Black-owned restaurants in the South Side of Chicago as well as in eateries in West Loop, a trendy district in the downtown area of the Windy City, and Michelin-starred restaurants.

“We want you to go in and drink your wine wearing your Jordan 1’s and your hoodie,” says Crump.

Although Michael Lavelle wines have sold more than 1,200 cases since its launch, Low says “we’re just getting started.”