Strategy: How a Graphic Designer Grew Business into a Retail Brand 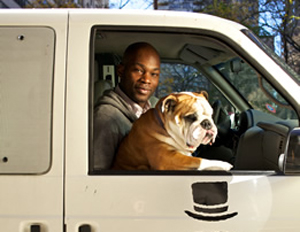 If you’ve ever dreamed of starting a fashion business, you want to read this. Seun Olubodun, 32, is the founder Duke & Winston, an apparel brand started in 2009 with a cult-like following. Seun has managed to accomplish what few have in just 6 years, turning a grassroots t-shirt company into a thriving retail business. Seun, an experienced entrepreneur, wasn’t feeling challenged by his job anymore and went search of new opportunities.

While visiting his parents in Boston, Seun walked into Johnny Cupcakes, a t-shirt store that smelled like a bakery. He noticed the store provided a unique experience only making one thing – t-shirts – but selling them over and over with a line out the door. A few weeks later, Seun quit his job and sold his Audi A6 to the first cash buyer for $5,200 to start his t-shirt company. “I needed to move quickly before I got discouraged,â€ Seun says. “If I take the cash right now, I can get started tomorrow.â€

Seun began vending at events all around Philadelphia. His first table at a festival sold 40 of the 50 t-shirts he made.Â  He typically paid $50 a table and made $600 to $2,000 per event. He used the money he earned to buy more inventory. The $5,000 quickly ran out and when he couldn’t pay rent anymore his roommates let him move into the basement on the couch next to the washer and dryer. That didn’t stop Seun; he kept going. Eventually he earned enough to by a van and put the Duke& Winston logo on it. He drove it all around the city and created buzz. “I knew I didn’t have a lot behind me so I wanted to make sure my presentation was above and beyond,â€ says Seun.

It wasn’t long before he landed his first retail account from Matthew Izzo, a local men’s shop, and Urban Outfitters followed with an order for 300 t-shirts that jump-started the business. But Seun never turned away from his grassroots marketing strategies and averages 100 events during the summer months. Two years into the business, he moved into a bi-level ground floor apartment and turned the downstairs into a showroom that looked like a Ralph Lauren store. Seun opened up his living room on the weekends selling 10 to 15 shirts daily from foot traffic on the block.

Duke & Winston made its first $100,000 in business from web sales and Seun’s apartment. When the city found out he was selling without a storefront retail license, they told him to shut down the showroom. Seun’s landlord thought he was innovative, so he jumped in and helped to renew the commercial license that was previously on the property. The Duke & Winston brand has continued to grow and just opened their first flagship store in downtown Philadelphia.

Seun shared the following advice for turning a passion for fashion into a real business:

Stand Out of the Crowd. Create a top-notch brand so that the company looks bigger than what it is.Â  Be honest with yourself and don’t buy into your own hype.Â  Duke & Winston works with a graphic designer from Tommy Hilfiger which gives his t-shirt designs a high-end look.

Know Your Market. Focus on the product you’re selling and make sure there’s an existing market for it. “I create my products for real people,â€ says Seun. “If I see ten guys wearing something, it inspires an idea for Duke & Winston.â€ Make sure that you know your product and what competitors are offering.

Focus on Selling. A lot of fashion businesses get caught up in the smoke and mirrors of the industry. Don’t spend a lot of money putting on fashion shows. Focus on the activities that will directly drive sales.

Seun Olubodun’s story shows us that people can make it in the fashion industry if they focus more on building a company that has the opportunity to grow and less on the fashion.

Jamila Payne is the Author of From Payne to Power and was selected as a “40 Under 40 Entrepreneur to Watch.â€ Payne develops marketing strategy that gets businesses to align with their online audience. She is CEO of Queued Digital, a marketing agency and Founder of Soul Circle, the premier online community for women entrepreneurs. Her mission is to empower people to achieve personal and financial freedom through entrepreneurship. She shares an inspiring message of “People, Purpose and Profitâ€. Connect with her on Facebook and Twitter @JamilaPayne.

Jamila Payne develops marketing strategy that gets businesses to align with their online audience. She is CEO of Queued Digital marketing agency and Founder of Soul Circle, http://soulcircle.soulpurposecompany.com/ the premier online community for women entrepreneurs. Connect with her on LinkedIn: www.linkedin.com/in/jamilapayne