How’s Your Heart, Sis? The Alarming Truth about Black Women and Heart Disease 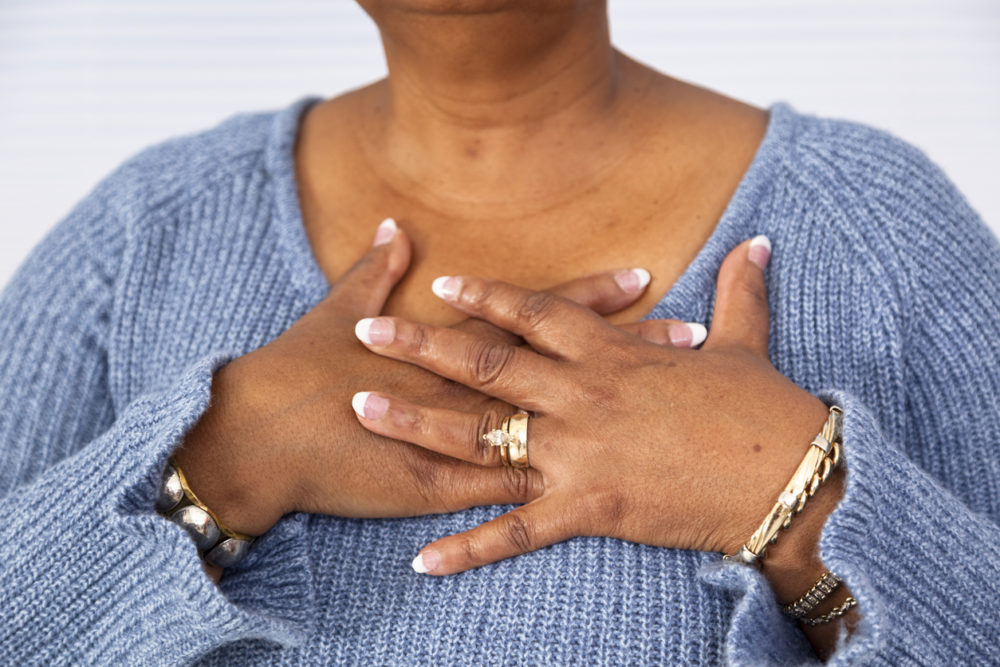 Aside from high mortality rates, 49% of black women ages 20 and older live with heart disease, yet only 52% of all black women are aware of the signs and symptoms of heart attacks, according to the AHA. And, those hardcore numbers are a part of the reason why Beverly Buchanan, nurse and heart disease survivor, says that black women need to know their heart numbers, listen to their bodies, and make themselves a priority. In 2012, Buchanan underwent open-heart bypass surgery for a major blockage in her main coronary artery to prevent a heart attack after suffering from chest pain for two months. (Coronary arteries are blood vessels that supply blood to the heart, and blockage of the arteries can lead to heart disease, heart attacks, and heart failure.)

Prior to her surgery, Buchanan pushed her cardiologist to run different tests and monitor her heart as she grew more concerned with her discomfort. Buchanan had a history of high cholesterol, was hypertensive, and had a family history of heart disease; but ultimately what saved her life was that she listened to her body. And since the surgery and surviving what could have been a deadly attack, she has been educating women on the disease to help them live healthier and longer.

Every day I have to consciously think, ‘what am I eating’ so that my diet can be healthy. I still have to have some enjoyment out of life. So, I eat that piece of bacon one day out of the week! But, at the back of my mind, while I’m doing that I have to very careful. I’m very fanatical about the low-sodium diet. My son gets mad at me because I threw all of the salt out of our house!

The main thing that I do is get in some exercise, even if it’s walking. I do my walking. I do that 10,000-step thing every day. It’s the little things because I’m kind of paranoid now.

How do you take measures to live more healthfully and prevent more heart-related issues?

What do women need to know about cardiovascular disease?

I always explain to him very carefully that this is something that he was born with but he doesn’t think that he has a cardiovascular disease. And, I’m always telling him that I beg to differ and that you do. So I tell him think about what his diet is because I’ve programmed into him to exercise and his cardiologist loves me because I keep him very active.

Specifically with African Americans, we don’t talk about our family history with anybody. We have a tendency to be closed off and that’s not something we should do. You should let people know this stuff. I always tell my son that he might not want to listen to me but I’m going to tell you the story about your father, grandfather, grandmother and he knows the story about me. My daughter, who is 31, in her case her paternal grandfather died at the age of 45 because of a heart attack and her maternal grandfather died of a heart attack at the age of 58. So she has cardiovascular problems on both sides.

During the last conversation that I had with my father, he kept insisting that he had to tell me something that was important. He was harping on and on and two days later he was dead. I told my mother that I think that he knew that he was going to die. But we had never had those conversations.

I call my mother the “traffic cop” because my father called her the traffic cop. She directed everyone else’s life, but up until her incident she did not go to the hospital for 43 years. It was a priority for her to tell all six of her kids what to do, how to do it, and where to do it but it wasn’t a priority for her to go see a doctor.

As African Americans, we don’t talk about our family history and that’s horrifying to me.

Pay attention to the signs

What are the signs of heart disease and heart attacks?

Our (women’s) symptoms are really so vague. Fatigue, shortness of breath, and a little sweating… The one thing with all of that vagueness, you’re always are going to have some chest discomfort to go with it. It may not be like men with that elephant sitting on their chest but that chest discomfort will always be there.

For me, the signs were there and I ignored most of them, but the thing that saved me was I was going to travel to Germany right before this incident and I knew that something was wrong. I assumed and knew in the back of my mind that it had to do with my heart. And it had to be fixed before I went to Germany because I didn’t want to be in a German hospital. It was as simple as that.

Get to know your doctor and push them

According to the CDC, in 2014, 44.8% of black women ages 20 and over are on medications for hypertension and 56.9% are overweight and both are contributing risk factors for heart disease. For many women, the relationship with a doctor can be the determining factor for how well and long they live. Buchanan says that it is important for women to partner with doctors and push them to get the answers they want. If she had not pushed hers, she probably wouldn’t be alive to tell her story and spread awareness.

How can women partner with, and push, their doctors?

As women, there are critical things that we need to know when we go to see our doctor. I can honestly tell you that my cardiologist is a friend. But, when I went in to see him my symptoms were so vague to him that he thought ‘why is she in my office in my ear?’ I was the one pushing him consistently to find out what was going on with me. We have a tendency to not listen to what our body is telling us.

The one thing he did was a stress test and it came back abnormally wrong. He still had it in his mind that nothing was wrong with me. So, we did a Coronary CTA (Coronary Computed Tomography Angiography) which you can diagnose from but you can’t treat from. After that he said, ‘Were you a man, I would have automatically taken you to the lab,’ but because I was a female and I was insistent and calm about it, he really didn’t take me seriously.

Sometimes we’re not taken seriously or people think we just need a little Ativan because they think we’re just anxious or have high anxiety. For women, it’s a little different because medicine is skewed toward the male perspective. Most of the research in the past has been done on them.

It’s okay to put yourself first

As a busy working woman, how do you prioritize self-care?

I am the classic type-A personality and I like to be in charge of everything and have control over the world! I’m like my mother, ‘the traffic cop.’ I’ve had to learn how to make me a priority. What I’ve found and with talking to other women, we have the tendency to not make ourselves a priority. We’re so busy nurturing and taking care of everyone else and somewhere in the background we forget about us. So, I have to make a conscious effort to say no to people.

I have to specially practice that at work. Prior to this incident, I was working 12 and 14 hours here and working someplace else. I thought, ‘oh, I have to get this done’ but I was caring for everyone else except for me. So now, that’s no longer the case and when it’s time for me to go home, I go home. I have to do walking for me and de-stressing for me. I have now made myself a priority and not everyone else. And, I also had to do it, believe it or not, with my child. As women, our kids are No. 1 and we do things to sacrifice for them and I had to think, ‘If I’m not here then who is going to take care of him?’

I had to learn to make me more important that I was.

What charge do you have for other women to get them to take their heart health more seriously?

One thing that I always stress is that you have to make yourself a priority and you have to listen to your body.

Somewhere in the back of your mind you intuitively know that what I refer to as the ‘big bad ugly’ is coming. And the main thing is that you need to be prepared for the ‘big bad ugly.’ Don’t stick your head into the sand, listen to what your body is telling you, be very persistent, and make people listen to what’s going on. Whatever you intuitively think is happening, you need to listen.

I didn’t listen. One of the things with women is that we wake up from sound sleep with a kick in the chest and we think that we’re going to die. And that’s what happened to me, and what did I do? I ignored it. I talked myself out of the feeling and that was the warning. I survived that warning. And a lot of times we are given the warning and we ignore it.

How has staying on top of your heart health and doing this heart work changed your life?

My family practice doctor, when all of this came about, he said to me, ‘I suggest that you tell your story to every woman that you like and even those women who you dislike to get them to understand how important it is to listen to their body….’

Prior to me being nominated for the Go Red for Women movement, I was teaching basic and advanced life support classes. I was telling women about heart disease and they were probably sick and tired of me saying it but it makes them think about getting checked out. Now I get the opportunity to talk about it with the American Heart Association, which is fantastic!

The one thing that saved me was that I listened to what my body was telling me.

To learn more about heart disease and ways that you can take steps to live a heart-healthy life, join us at the Women of Power Summit for tips and visit the American Heart Association’s Go Red for Women website.