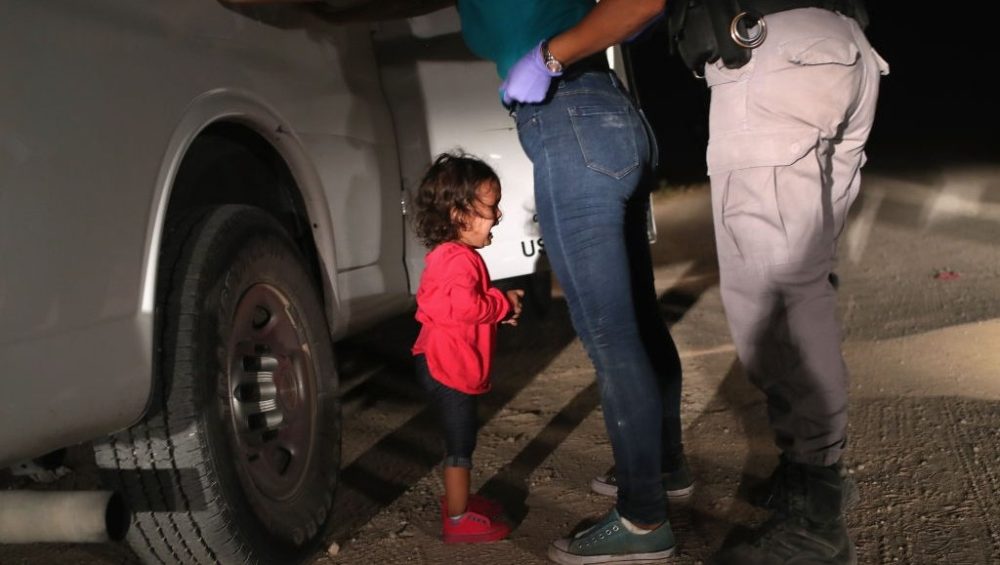 The images are heart-wrenching: toddlers in tears, a chorus of children’s voices wailing for their mothers and fathers, boys sitting forlornly in cages. In April, the Trump administration put into effect a “zero-tolerance” immigration policy that is escalating into a human rights crisis at the United States’ southern border. With the new policy, the administration is prosecuting as many people crossing the border as possible. Many of these migrants cross the border with children. As The Washington Post explains, when the adults are prosecuted, they are taken into Department of Homeland Security (DHS) custody. The children are separated from the adults, their parents, in most cases, and are placed in internment centers or “tender age” shelters since children cannot be detained by DHS. According to The Washington Post:

Adding it all up, this means the Trump administration is operating a system in which immigrant families that are apprehended at the border get split up, because children go into a process in which they eventually get placed with sponsors in the country while their parents are prosecuted and potentially deported.

Journalists have traveled to the detention centers where these children are being held. The images and reporting have sparked outrage around the world. “The Department of Homeland Security facilities do not meet the basic standards for the care of children in residential settings,” the American Academy of Pediatrics stated in a released document. The head of the United Nations’ Human Rights Council called separating these migrant families “unconscionable,'” and called for the end of the practice (shortly after, the Trump administration announced that it was withdrawing the U.S. out of the Human Rights Council accusing the organization if being “a cesspool of political bias.”)

Historically, there has been a covert effort to drive a wedge between African Americans and immigrants. Alan Jenkins, executive director of The Opportunity Agenda wrote in an essay, “The mainstream media have fixated on potential points of black/immigrant tension, looking for a conflict storyline. And that storyline has been amply fed by conservative anti-immigrant groups intent on driving a wedge between the two communities.”

And yet, the harrowing images of migrant children held captive in tent cities and cages; sleeping under blankets made of aluminum foil, have black leaders speaking out. When Attorney General Jeff Sessions quoted biblical passages as justification for the zero-tolerance policy, African American religious leaders pushed back. CBS News reports that leaders at The Council of Bishops of the African Methodist Episcopal Church said, “The Bible does not justify discrimination masked as racism, sexism, economic inequality, oppression or the abuse of children.”

Rev. Al Sharpton accused the Trump administration of enacting this policy because these are children of color. “There is a different policy here, and that is playing hardball with the future of these young people,” he said at a news conference in Washington, D.C. yesterday. Sharpton and other activists plan on visiting the immigrant children at the border.

Black Congressional Members Have Their Say

Perhaps some of the sharpest criticism has come from Rep. Elijah Cummings. Cummings called the new immigration policy “the key moral and ethical issue of the day.”

Rep. Maxine Waters thanked members of Jeff Sessions’ church when they sent him a letter with over 600 signatures condemning the zero-tolerance policy and accusing the administration of child abuse.

“Kick him out in the name of the Lord!” urged Rep. Waters on Twitter.

In addition to political and spiritual leaders, black influencers and celebrities have also criticized the policy. John Legend, who has been vocal about his disdain for President Trump, sent this tweet after Paul Ryan posted a picture of his family on Father’s Day:

And in an Instagram video, Oprah said that this is a story that is “important to all Americans.”