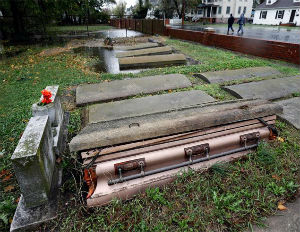 Coffins buried six feet under in a graveyard near Baltimore were dislodged and lifted to the earth’s surface during flooding caused by Hurricane Sandy on Wednesday.
The coffins were discovered during the day on Halloween. One silver and one bronze casket had ascended from the ground as the cemetery in Cristfield became water-logged.
.
When the flood waters receded on Wednesday the coffins appeared.
Read more at the N. Y. Daily News.

FacebookTwitterYoutube
← Building, Planting, and Moving Ahead ← A Look at the Catastrophic Economic Impact of Sandy
×