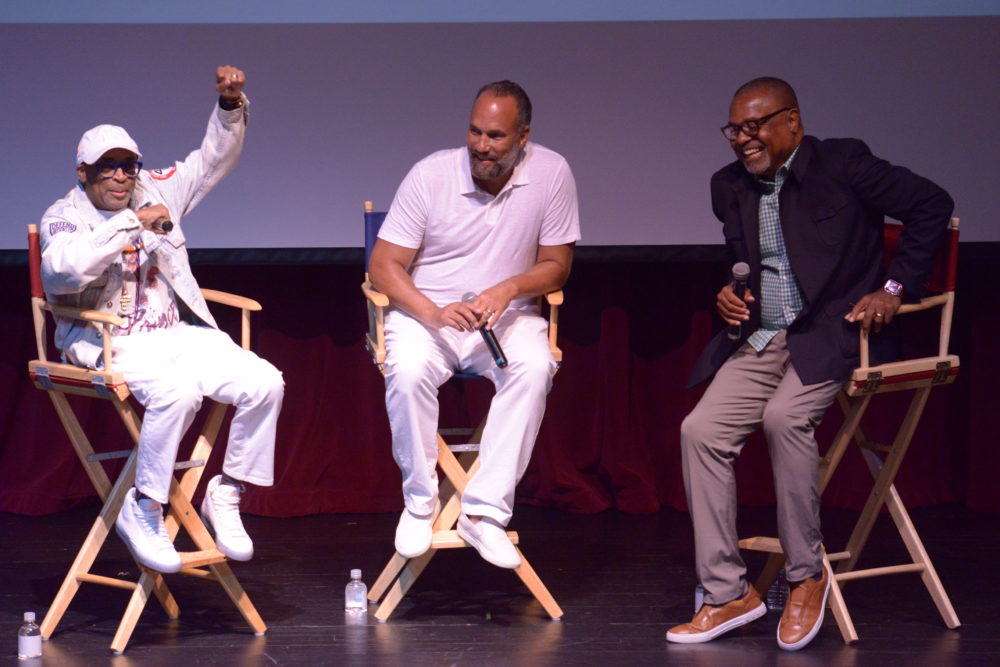 This month, MVAAFF founders Stephanie and Floyd Rance received a special citation from the State of Massachusetts’ Governor’s Office for their significant contributions to the local economy of Martha’s Vineyard. With more than 2,500 participants at this year’s festival, the island saw a marked increase in housing rentals, hotel bookings, restaurant patronage, and lifestyle and consumer shopping.

The Rances held the inaugural festival in July 2002 in Oak Bluffs on the Island of Martha’s Vineyard. “Fifteen years is an outstanding accomplishment and everyone should be applauded,” says Floyd Rance, who co-founded the MVAAFF with his wife, Stephanie. “I always consider this event our third child and just like our other children we are equally as proud of this event. We have nurtured it and watched it crawl, helped it to its feet, and watch[ed] it walk.”

When Corporate and Art Backgrounds Unite

The Rances came to film festival production from backgrounds in corporate media and film production. Stephanie left her corporate job at Westhill Partners as director of public relations more than 15 years ago to pursue her lifelong dream of becoming an entrepreneur and eventually launched her marketing firm, Crescendo.

Floyd, a film producer and cinematographer, started his career working on Spike Lee’s Mo’ Better Blues. The Howard University graduate continued working with Lee and director/cinematographer Ernest Dickerson on the acclaimed films Jungle Fever, Malcolm X, and Clockers, among others. Floyd also produces episodic television and commercials; some of his clients have included HBO, Reebok, Foot Locker, and Family Dollar, to name a few.

After leaving corporate America, Stephanie was taking a much-needed break while her husband was working on an independent short film in Barbados. During that time, she began to think about marketing initiatives that she could bring to the Island of Barbados. After returning home, she arranged a meeting with the management team of the Barbados Tourism Board in New York, which was looking to increase travel to the island by African American visitors. In her proposal, she included a pitch to bring a film festival to Barbados.

In the summer of 2000, the couple rented a house in Martha’s Vineyard, one of their favorite vacation destinations. They met a filmmaker who brought her short films to the Vineyard and convinced the local owner of the former Strand Theatre in Oak Bluffs to allow her to screen her films. He agreed, and the line to see her series of shorts extended around the block.

“Subconsciously, I kept that moment in the back of my mind,” says Stephanie. “If you’ve been to Martha’s Vineyard, [you know] there’s not a ton to do on the island in the evenings.”

A Setback Turns Into an Opportunity

In 2001, the Barbados Tourism Board was ready to move forward with creating the island’s first film festival. Instinctively, Stephanie knew the film festival was a good idea for the Island of Barbados, as she reflected on that moment with the female filmmaker in Oak Bluffs. Not knowing anything about producing a film festival, she stumbled across a group on Yahoo.com titled Black Filmmakers, which still exists. She posted information about the festival and soon filmmakers were submitting their works along with registration fees for consideration to screen their projects. She received almost 15 film entries and secured both Showtime and AOL Black Voices as festival sponsors.

Unfortunately, the tragedy of the 9/11 attacks occurred that year; the Barbados Tourism Board, nervous about the negative impact on international travel, pulled out. Thinking on her feet, she decided that it would be a great idea to host the film festival in Martha’s Vineyard.

MVAAFF’s inaugural four-day event in 2002 had only 10 attendees. Though Stephanie had secured sponsorship for the fest, the representatives never showed up.

“I could have given up,” Stephanie recalls of that early disappointment. “But I said, ‘You know what? I think I have something here. I’m going to stick with it.’ And 15 years later, the film festival is a huge success with sold out audiences and rousing standing ovations nightly. It’s been a long and rewarding journey. We are very proud of it.” There is much to be proud of. Now hailed as the summer’s finest local film festival, the MVAAFF attracts more than 2,500 attendees worldwide.

The Business of Building a Film Festival Brand

Producing the MVAAFF is a family affair for Stephanie and Floyd, who have two children. “There are pluses and minuses in our partnership,” Stephanie explains. “The great thing is that the money stays in the family. We might squabble about which films get in and which films don’t; Floyd is looking at it from a cinematic lens, and I gauge movies based on what pulls at my heart strings. We’re great partners, and I wouldn’t do it with anybody else.”

Each year, the festival has attracted more sponsors, as well as sponsors for individual events; over the past five years sponsorship doubled. Also, the founders included merchandising to their bottom line, with the sale of branded T-shirts and caps, which have become the festival’s must-have items. The growth has kept pace with the increase in conference registration and participation, numbers that remained steady even through the 2008-2009 recession.

The MVAAFF showcases between 50 and 60 films; currently, all the films are screened at one location, the Martha’s Vineyard Performing Arts Center (MVPAC), which seats 800 people. Utilizing one theater venue for the festival is an added value for the filmmakers, sponsors, and attendees since no films or events are scheduled at the same time.

The MVAAFF draws a diverse and affluent group of attendees and loyal supporters. . There’s a large contingent of people from the Washington, D.C., area, with several from President Obama’s administration, including former Attorney Generals Eric Holder and Loretta Lynch as well as state and local politicians. The event also draws educators, doctors, and lawyers; and Ivy Leaguers from Princeton, Stanford, and Harvard, including Professors Charles Ogletree, Henry Louis “Skip” Gates Jr., and Khalil Muhammad. The festival is also popular among the alumni and students from historically black colleges and universities, including Howard, Morehouse, Hampton, North Carolina A&T, and others.

“Our festival is different from other festivals, it’s like a family reunion,” says Stephanie. “It’s not a celebrity gawk fest; we’re not into that. It’s not pretentious; it’s laid back and cool.”

Over the years, the festival has screened a wide range of works including Hidden Figures, Baggage Claim, The Princess and the Frog, Birth of a Nation, Chi-Raq, Four Brothers, Idlewild, Miracle at St. Anna, and Whoopi Goldberg Presents Moms Mabley, along with noted documentaries Anita, A Ballerina’s Tale, The Nine Lives of Marion Barry, and television series Blackish and Backyardigans.

Expanding Beyond the Vineyard

The Rances are extremely pleased with the support they have received from the film studios and television and cable networks as well as from the black film community. By creating a great platform for future filmmakers, Stephanie and Floyd are proud to have seen several festival participants go on to achieve greater milestones in their film careers. In fact, the exponential growth of the Martha’s Vineyard festival in recent years is leading to expansion beyond the beloved island.

The Martha’s Vineyard African American Film Festival is very special to us and our loyal attendees,” says Stephanie. “We will remain on the island, but we are currently planning another three-to-four-day festival stateside that will launch in October 2018.” The name, date, and location of the new event will be announced separately.

“We are asked constantly to start a new festival,” Stephanie continues. “We would like to serve and accommodate the larger artistic community, and we plan to make [the new festival] bigger and better.”