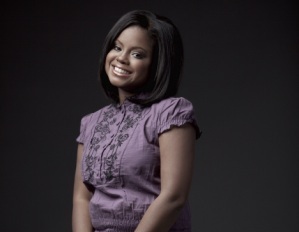 International HIV/AIDS activist and motivational speaker, Hydeia Broadbent, didn’t choose her career path, it chose her. Abandoned by her drug-addicted biological mom, Broadbent, who was born HIV positive, has turned what many might have considered a tragic tale into a triumphant one, dedicating her life to helping keep others from getting infected.

Since the age of six the Las Vegas native–who was adopted as an infant–has been a renowned public speaker, traveling to universities like Duke, UCLA and Howard, and appearing on such television programs as The Oprah Winfrey Show, 20/20 and Good Morning America to warn teens and young adults about the dangers of unsafe sex.

In March of 2010, Broadbent teamed up with the Centers for Disease Control and Prevention to help launch a new social media initiative called “I Know.â€ Its purpose is to encourage African Americans ages 18-24 to talk openly about HIV, to know their status and to get tested. The campaign features public service announcements starring celebrities such as Jamie Foxx and Ludacris, and utilizes social media outlets like FaceBook and Twitter to get the word out.

“I lead a pretty normal life but the medicine that helps keep me healthy is very expensive,â€ says the activist, who relies on the state to foot the enormous bill. “Nowadays kids don’t see HIV as a death sentence. Some of them know people with HIV and assume it’s as easy as popping some pills every now and then. It’s not; each pill I take costs $750.â€

The money is just one of Broadbent’s many hardships.

“The medication can also make you really sick,â€ admits the 26-year-old, who says she spends more time than she’d like inside a doctor’s office. Broadbent also points to the lingering stigma around having HIV/AIDS and says despite having an active social life, dating isn’t easy. “I was once in love with someone who wasn’t strong enough to deal with me having AIDS,â€ she shares. “That affected me a lot because AIDS is part of me.â€

“People sometimes think because I was born with HIV my story does not apply to them,â€ she adds. “But I’ve had it all my life. Who better to tell you about the disease than someone who has never lived a day without it? My message to young people is that having HIV affects you mind, body and soul. It’s not a death sentence but it does make things a whole lot more complicated.â€