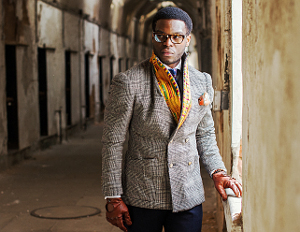 IkirÃ© Jones is the brainchild of Wale Oyejide, crowned by Esquire Magazine as one of the “Best Dressed Real Men in America.â€ His clothing line is a sly mix of fashion forward eclectic designs with an urban sensibility. Rather than creating beautiful garments that lack the functionality to be worn every day, IkirÃ© Jones designs high quality attire that’s at home in the office or after work. His dapper style can best be described as “West Africa meets Brooklyn.â€

We recently sat down with Wale to discuss his clothing line, his background and his road to entrepreneurship.

BlackEnterprise.com: What made you decide to launch a line of menswear?

Wale Oyejide: I’ve always seen myself as something of a creative. Before I went to law school and entered the practice of law, I spent a few years as an independent musician. I put out a few albums before deciding to attempt to do something a bit more “respectable.”Â  Well, fast forward a few years later, and I have realized that none of us should try to bury who we really are. I’m very proud to be an attorney, but I’m more proud to be someone who is also bold (and a little foolish) enough to follow his passions.

The IkirÃ© Jones line is just another avenue for me to feed that creative spark inside me, while paying homage to my Nigerian heritage and addressing the fact that so many men are in dire need of help where their wardrobes are concerned.

The world arguably has too many lawyers. Sadly, the same cannot be said of independent thinkers who want to push society forward with their talents.

Well stated. It’s refreshing to see someone wholly accept the challenge of being an entrepreneur, especially coming from a relatively secure career as law. What obstacles have you faced since becoming an entrepreneur?

WO: No one gets anywhere on their own; and it makes very little sense to attempt to reinvent the wheel. However, as a lone gunman entering a foreign (to me) industry, part of the struggle has simply been in knowing where to get information and who to speak with about reaching the next milestone. Oftentimes, the older guard look upon new faces with suspicion and can be wary of disclosing the wealth of information they’ve amassed over the years. In my experience, one just has to knock on enough doors until the right one eventually opens. It’s hard work, but if you ask enough people, someone will usher you in the right direction.

You mentioned being an independent musician before becoming an attorney. Are there any lessons you garnered from the music industry that you’ve been able to apply to running a clothing line?

WO: Though I had virtually no background in the fashion/retail industry when I decided to launch my brand, I had the benefit of a music career behind me (albeit a short one).Â  Early on, I learned that being talented and creative has very little to do with actually selling a product and bringing it to the masses. This has proven true both in music and in fashion. The most forward-thinking artist or artisan will be left behind and forgotten if no one sees his/her work while it is still relevant. The marketing of a product is just as important as the product itself. Sometimes people sacrifice one for the other. Becoming successful really requires that one learn to walk the tight-rope between the two.

Right away I was struck by the subtle aspects of your clothing, such as incorporating kente fabrics in your designs. What else sets your clothing apart from what’s already out there?

WO: The most obvious point of separation between my garments and those sold by other brands is my bold use of West African wax-prints to line my jackets. The pocket squares sold by my brand also rely heavily on African aesthetics.

Design elements aside, there is the matter of quality and construction. My jackets are all fully-canvassed; a method of construction typically reserved for higher-end suiting.Â  Further, the jackets are all made in Brooklyn, NY or Philadelphia, PA. I pride myself on being able to inform my customers, with a clear conscience, where the garments they buy are made. There are no sweat shops or questionable labor practices at work where IkirÃ© Jones is concerned. Unfortunately, there are not many other brands that can promise the same.

If you could tell aspiring entrepreneurs any advice or words of wisdom, what would it be?

WO: It’s imperative that an aspiring entrepreneur stockpile as much cash as he can before he cuts the cord from his 9 to 5 and leaps into the void. For a very small number of us, success happens shortly after we launch. This is rare. The vast majority of new businesses languish for years in relative obscurity while honing their crafts and mining for that diamond called success (however you choose to define it). To put it plainly, you will need sustenance that will carry you through the lean and wintery years (of which there may be many).

In addition to plotting your escape from your 9 to 5, it also really helps to have a partner in crime. I’m fortunate to be blessed with a very supportive spouse who shares my vision and sees my potential. We all need someone in our corner who won’t just tell us not to quit, but will also make sure we come out swinging.

That said, there is nothing like striking while the iron is hot. I think too many people stick out a bad situation because they fear that “it’s too soon to leave.” The danger of this approach is that you might miss your window of opportunity.Â  Sometimes, you have to just jump.