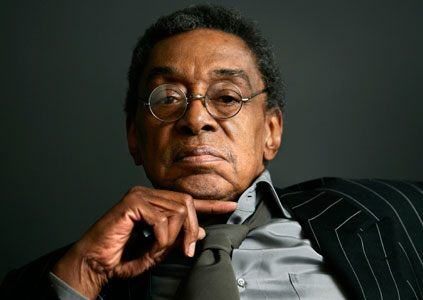 Don Cornelius gave soul music a place to live. In 1970, he created and hosted the show Soul Train, the first black music variety show on American television. Cornelius died Feb. 1, 2012, at the age of 75.

Cornelius started out in the insurance business in the 1950s, but decided to pursue a media career in 1966 as a radio broadcaster on Chicago’s WVON. He moved on to a career in television in 1968, serving as sports anchor and host of the show A Black’s View of the News. This transition revolutionized television programming. Desiring to expand the offerings for black viewers, Cornelius pitched the station owners his idea for a black-focused music television program. He used $400 of his own money to produce the pilot for the Saturday morning music show Soul Train, which was inspired by the variety show American Bandstand. The first show aired in August 1970, and continued Saturday mornings until it ended in 2006. Cornelius hosted until 1993. He always ended the program with his enduring chant that wished his audience “love, peace, and soul.â€

Soul Train quickly became a hit. The show went into syndication in October 1971, appearing in seven markets, including Atlanta, Detroit, Los Angeles, and Philadelphia, and expanded to 25 markets within a few short months. By 2005, Soul Train was being viewedÂ  in 105 markets. Soul Train became a high-grossing franchise with spin-offs such as the Soul Train Music Awards in 1987, Soul Train Comedy Awards in 1993, Soul Train Lady of Soul Awards in 1995, and Soul Train Christmas Starfest in 1998.

Soul Train became one of the longest-running syndicated shows in American television history,Â  providing exposure to every major black act, ranging from R&B to hip-hop. Legendary artists who have appeared on the program include superstars Michael Jackson and Prince, soul singers Aretha Franklin, Marvin Gaye, and Anita Baker, funk performers like Rick James and Parliament/Funkadelic, pop artists such as The Jackson 5 and The Time, and hip-hop acts like the Sugarhill Gang and Run-DMC, just to name a few. Every major label in the industry wanted their acts on Soul Train as a means of generating greater airplay and record sales. He also provided opportunities for generations of African Americans in the entertainment industry behind the scenes.

Moreover, Cornelius used the platform to launch Soul Train Records in 1975 with his partner Dick Griffey. The venture later became Solar Records in 1977, a be 100s entertainment company that introduced the music world to, among other acts, The Whispers and Shalamar, which featured crooner Howard Hewett and former Soul Train dancers Jody Watley and Jeffrey Daniel.

Long-time friend Don Jackson, Central City Productions chairman and CEO, spoke to BlackEnterprise.com, saying, “We have lost a pioneer in the field of television and music, who opened doors for African Americans in the television industry with the longest-running weekly series in television.â€

Cornelius is survived by his two sons, Anthony and Raymond.