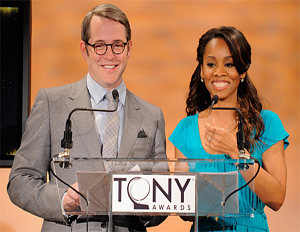 Sister Act received a total of five nominations and The Motherf**er with the Hat starring comedian Chris Rock brought in six nominations.

The 2011 Tony Awards will be held on Sunday, June 12 at the Beacon Theater in New York.

An hour after House of Oklahoma Rep. Sally Kern‘s tearful apology, she was reprimanded by her colleagues for offensive comments made during an affirmative action debate. The House of Representatives voted 76-16 to take action against the lawmaker.

During last Wednesday night’s rant, Kern said minorities and women earn less than men because they don’t work as hard and have less initiative.”I taught school for 20 years, and I saw a lot of people of color who didn’t want to work as hard,â€ she said.

This isn’t the first time the Oklahoma Republican has come under scrutiny for her words. Her anti-homosexual commentary brought her national attention back in 2008.

A recent Nielsen Company study shows a decline in television ownership. An estimated 114.7 million households own television sets; the number of U.S. households with TVs slipped from 98.9% to 96.7%.

Nielsen attributes the decline to the economy, various platforms for media consumption, and the digital changeover from TV sets with built-in tuners to those with digital-to-analog converter boxes.

“The media marketplace continues to evolve and become more complex,â€ said Pat McDonough, senior vice president of insights and analysis at The Nielsen Company. “Some consumers are clearly being driven by the economy to make choices on the media devices they purchase. Others are expanding their equipment to add more audio/video devices to their home. Still others may be deferring a TV purchase or replacing their TV with a computer.â€