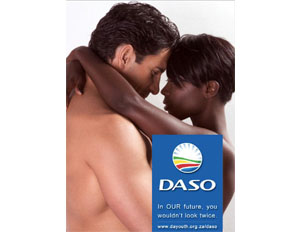 A political ad created by the student wing of the Democratic Alliance party, which shows a white man and a black woman embracing, donning the tagline “In OUR future, you wouldn’t look twice,” is causing quite a stir.

The poster has incited a heated debate among local media and politicians, according to the Washington Post.

“Love the DA! This campaign image is exactly what South Africa needs…[we] can stand together as one post-apartheid nation where race, religion or sexual preference doesn’t mean anything, we’re all human! Go DA! You have my vote. :-)â€

Other users, however, had much harsher things to say, condemning the poster for “immoralityâ€ and calling it an “abomination.”

According to the Washington Post, one commenter posted a photo of an all-white, blonde family, saying “Now that’s how it should be!”