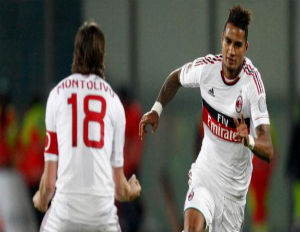 Kevin-Prince Boateng, a Ghanaian member of Italy’s AC Milan team, was so fed up with racism on the soccer field he left the game, according to the Root.

At a match against Pro Patria, Boateng responded to a racist chant from the stands by throwing the ball into the stands, tearing off his shirt and leaving the field. The rest of the players followed, as did the game officials.

Pro Patria has been suspended indefinitely because of their racist fans, AC Milan’s website announced

Watch the video at the Root.