How Iyanla Vanzant Is Stopping The Suffering Of Black Men 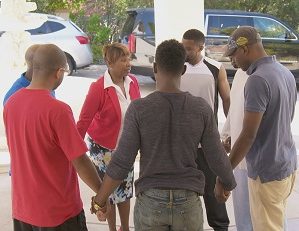 Michael McCary, the smooth bass singer of Boyz II Men, sums up his feelings about his ex-bandmates in a three-part, multi-week episode of OWN’s Iyanla: Fix My Life.The minister, healer, and spiritual life coach, Iyanla Vanzant, returns to the House of HealingÂ with six African American men that she characterizes as “struggling with broken spirits and broken hearts.”

The 44-year-old McCary joined Iyanla’s House of Healing to address who he is as a person, not a performer. On the show, he confronts his issues with abandonment, which he experienced in 2003, when he and Boyz II Men parted ways. Though the severance of this relationship was dubiously associated with an illness for nearly nine years, recently band members have publicly said it was actually McCary’s lack of commitment that did him in. He opens up with Vanzant about the “betrayal” and “broken bond” that he has been struggling with ever since.

Vanzant opened the new season of her award-winning series by inviting eight women to move into her House of Healing to challenge and ultimately dispel the “angry black womanâ€ myth. SheÂ toldÂ BlackEnterprise.com that the biggest difference between the men and women who entered the House of Healing is that once she got the men there–inside the house–they were committed to doing the work. In comparison, there was still skepticism and hesitance among the women, even after they entered the dwellingÂ before they were opening up to her and willing to work on their issues.

Stopping the Suffering of Black Men

Others in the House of Healing include a man that is attempting to build a life for himself after numerous stints in jail, and a father looking to mend a relationship with his famous socialite daughter. These men are all struggling with their identities, due to the effects of feeling criminalized, dehumanized, and victimized by society, according to the show’s producers.

In three groundbreaking episodes (airing October 29, November 5, and November 12), Vanzant will explore each man’s story and reject the narrow parameters society uses to define manhood. Also, she will help each define themselves in ways that honor their strengths, culture, and relationship to society.

According to OWN’s YouTube channel, in the descriptive supplement for a show promo, “For Iyanla, fixing a black man’s heart isn’t only vital for society, it’s also deeply personal. As she welcomes six black men into her House of Healing, the life coach opens up about how her family experiences have led her to this moment, and explains why men like her father and brother need healing.”

A prolific writer,Â Vanzant has also published seventeen books, which have been translated into 23 languages and sold millions of copies. Her most recent book is Forgiveness: 21 Days to Forgive Everyone for Everything.