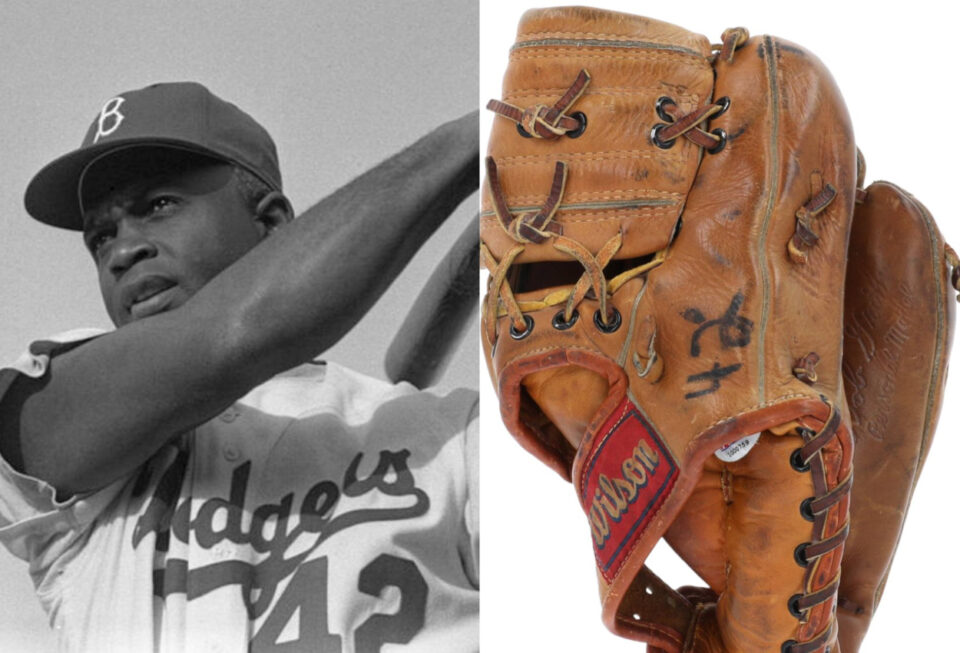 An auction has been announced that will feature the sale of a glove worn by the first Black man to play Major League Baseball.

According to the auction site, Goldin, a baseball glove worn by Brooklyn Dodgers player, Jackie Robinson, is up for sale and is currently taking bids for the item until next month on Oct. 1. Robinson wore the glove during the 1955 and 1956 seasons. The memorabilia is a used Wilson A2054 Professional Model Glove and has been verified and authenticated by Professional Sports Authenticator/DNA Technologies Inc. (PSA/DNA). A letter of provenance will be included with the purchase.

The item has been identified as a Bob Grim model fielder’s glove made by Wilson.

“Based on our dating of the glove, we can conclude that Grim became a Wilson endorser after his Rookie Year. During the 1955 and 1956 season, Robinson’s last, Jackie’s primary game glove was a Bob Dillinger Rawlings model. The manufacturing date does qualify this glove as being in the Dodgers Clubhouse when they packed up and left for Los Angeles. Additionally, Robinson’s number “42” on the back of the thumb sleeve is in a style that has been photographed on other gloves game worn by Jackie (see attached). Robinson did use a Wilson glove as his primary game glove earlier in his career.”

“Judging by the use displayed, the subject glove was used by Robinson as a back-up glove or during pre-game warm-up…”

Goldin has claimed that this particular glove is only one of two Jackie Robinson-used gloves that PSA/DNA authenticated. The copy of the original letter of provenance reveals that this item comes from a collection owned by Jack Semel. He was reportedly a longtime ticket holder at Ebbetts Field, the home of the Brooklyn Dodgers in Brooklyn, N.Y. Semel had seats from the mid-1930s by the Dodgers dugout, where he sat until the team left New York for Los Angeles after the 1957 season.

As a longtime fan with proximity to the baseball field, Semel reportedly became friends with many Dodger players and executives. As stated in the letter of provenance, “When the Brooklyn Dodgers went to L.A., a lot of players gave him mementos of their playing days in appreciation of the loyalty he showed them. These players were Gil Hodges, Jackie Robinson, Roy Campanella, Pee Wee Reese, etc.” This glove was reportedly one of the items given to Semel.

TMZ has reported that the glove is expected to be bought for $750,000.