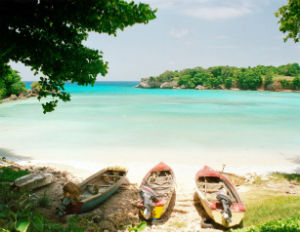 As a hardworking entrepreneur in the entertainment industry, I often spend long hours behind a desk or in crowded venues. Imagine my gratitude and excitement when I learned that I would be leaving my desk behind and taking my work to Montego Bay, Jamaica. In the midst of a scenic backdrop void of office buildings and busy sidewalks, I was able to complete the job of overseeing the VIP/Press Reception & Destination Weekend for the upcoming release of the film trilogyÂ The White Witch of Rose Hall.

The weekend was filled with a combination of work, play, and a few ghost stories while I covered Global Renaissance Entertainment Group’s feature film trilogy from producers Arthur Wylie and Dale Godboldo, and executive producers Michael Rollins and Jeffrey Reddick, the creator of Final Destination. Press members went on a tour of the island to learn about filming plans, divulge information about the film’s major participants, and spill the beans about the plot. The White Witch of Rose Hall tells the story of the legendary Annie Palmer, whose spirit haunts the grounds of Rose Hall Plantation in Montego Bay. According to the legend, Annie murdered her husband and plantation owner, John Palmer, and was eventually killed herself.

Press and media on location included major national and international outlets. The film team has committed up to $90 million to produce The White Witch of Rose Hall. And with Halloween approaching, the timing of the tour couldn’t have been better. The efforts of Global, Rollins, Chukka Tours, and Kirk Hamilton of the Destination Experience made sure that the visit to the island and to the haunted Rose Hall location was exciting and professionally executed; they also solidified the film’s haunting ambiance.

Leaving the beautiful island and flying back to the office was a welcome experience. The producers left an impression on the press and raised a few hairs on the back of my neck with the creepy, yet intriguing story of Annie (also spelled Annee) Palmer and the Rose Hall Plantation. Although Montego Bay’s relaxing scenery was refreshing, the trip is most memorable for its haunting stories and the anticipated international release of The White Witch of Rose Hall.