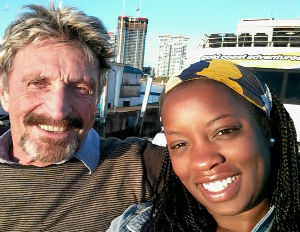 Even if you have never heard of John McAfee, you have likely heard of his eponymous McAfee antivirus software. McAfee has received a lot of attention lately for more than his technical achievements.

The tech security guru was embroiled in a scandal in his adopted country of Belize in 2012, and was identified by authorities there as a person of interest in a murder. Fleeing Belize, he sought and was denied asylum in Guatemala. He returned to the United States, the country where he made his fortune in software. He now resides in Tennessee with his wife, Janice Dyson McAfee.

The spotlight never fades from McAfee, who had a recent arrest for driving under the influence and weapons possession. Â His latest media stirring (or stunt, depending on viewpoint) was his announcement of running for President of the United States under his newly-formed Cyber Party.

McAfee undoubtedly attracts media attention. While he is often interviewed and photographed with Janice, little is known about her.

In an email interview with BlackEnterprise.com, Janice Dyson McAfee shared revelations about her life, her views on the media’s obsession with her husband, the presidential run, and the new technology business they launched.

Can you tell us about the new tech business venture and your role in the business?
McAfee:Â Future Tense Central is a security and privacy company that offers innovative mobile and web applications with the highest degree of security. Our goal is to deliver the tools you need to take back control over your information and privacy. It was actually me who gave John the idea about starting the company. About two and a half years ago I needed to do some banking but I didn’t feel like going out, so I decided to download my bank’s application to do my banking online.

As I’m downloading the app, I noticed that there are some terms that I have to agree to in order to complete the download. So out of curiosity, I started reading some of the terms and they seemed a little excessive for a banking application. I started going through all of my applications to see what sort of permissions I granted and it was shocking. I brought this to John’s attention and Future Tense Central was born.

Do you like tech? What is the most interesting tech to you these days?
To be honest, I’m not a ‘techie’ at all. Most of what I know about the tech world is what I’ve learned since being with John. What I like most about tech is the convenience that it has provided. But I think what’s more interesting is how we are blindly accepting this new technology without understanding the freedoms and privacy we are giving up for the convenience of this new technology.

How did you meet John McAfee?
I met John the night he was deported from Guatemala. He looked as defeated as I felt. I think we recognized in each other the same feelings of loneliness and emptiness. When he was deported from Guatemala, the government of Belize had illegally seized all of his property and bank accounts. So he literally left with only the clothes on his back.

He invited me to sit down and have a cup of coffee, then told me the extraordinary account of his ordeal and I was mesmerized. I had never met anyone with the strength and courage that he displayed and the calmness with which he accepted his situation. Here was a man who had everything and lost it all through an unjust act, and the only outward sign was a weariness that could have been expected from a man who had been on the run for two months.

He was gracious and polite as he listened intently as I talked, as if his own problems were insignificant and mine were monumental. I had known many men, but I recognized immediately that the man sitting at the table with me was in a class of people that I had only dreamed about knowing before. One thing led to another and I soon found myself on a road trip across the country with him. It was one of the most beautiful times of my life. John displayed a knowledge and a worldly kind of experience that captivated me. I have been with him ever since.

There have been some fairly serious allegations against him; did that make you hesitant in any way in marrying?
No, not all. The allegations against my husband are nothing more than so-called journalists and biographers sensationalizing my husband’s story in order to make a name for themselves. Less than 10% of what is written about my husband is true, and most of it is written without him even giving an interview. The media has told so many lies about my husband, it’s disgusting. Anyone that truly knows John knows that he has the biggest heart and he has a genuine love for people.

What actually started his war with Belize is that he was giving money to the locals instead of “donating” to the government. He opened several different businesses in Belize and hired only the locals to run them. He gave so many Belizeans an opportunity to earn a steady income. He never took a dime from any of the businesses and all the profits went directly to the locals; millions of dollars. The government officials didn’t like that. So he made the decision to take his story to the international press to speak about the corruption in the government and he was labeled a drug addled, child molesting crazy man.

There are hundreds of stories that I could tell you about my beautiful husband but that would take years. I’m definitely not saying that John is a saint, but he’s definitely not the monster the press is trying to portray him to be.

Is a McAfee Presidential run still a go?
Of course it is, and I am so proud of my husband. He really is the only candidate who can bring this country back from the brink of desolation. He is a visionary who saw the threats of computer viruses long before any of his competition and I believe that’s exactly the kind of leadership that we need now. The campaign is less than four weeks old and already he is making waves. In the most recent Internet poll done by the iOS application, 1600 Pennsylvania Avenue, my husband led every other candidate by a wide margin.

What would a First Lady Janice McAfee be like? What would be your initiatives? For example, Michelle Obama pushes for healthy childhood eating habits. What would be your important causes?
I believe that our system of education is outdated and ineffective. The world changes at an increasingly rapid pace and our system of education must be flexible enough to keep up with that change. Textbooks, for example, take years to write and publish and, when published, they are frequently already out of date. Teachers likewise do not update their knowledge as the knowledge base changes and the combination results in a generally useless system. We need to use the advanced technology of communications, cloud based knowledge and universal access through the Internet and other systems, to create an evolving system of education. Otherwise, our children will be unable to compete effectively in the modern world.

My next concern is domestic violence. In our current system, a victim of domestic violence has unrealistic choices that in reality provide no real protection. Restraining orders, in truth, are nothing more than pieces of paper to the abuser that cannot enforce the words that they represent. We must find alternatives that provide true protection for the abused and ironclad restraints for the abusers. This will also be one of my priorities as First Lady.