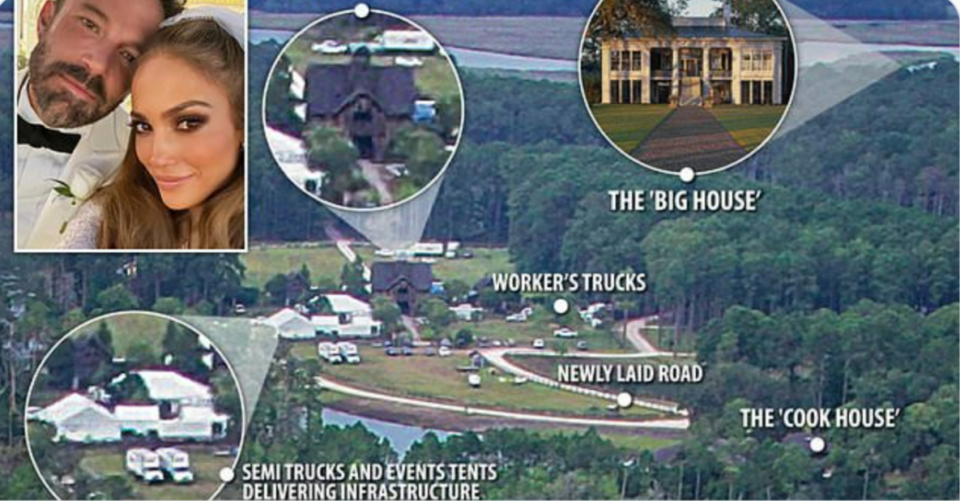 Jennifer Lopez and Ben Affleck are under fire for seemingly waiting 20 years to get married at his “plantation-style” home in Georgia.

The same man who got a whole season of Finding Your Roots canceled in 2015 due to his desire to hide his slave-owning ancestry decided to marry his Puerto Rican wife at his estate, which was built to resemble a plantation.

J. Lo and Affleck tied the knot for a second time on Saturday, USA Today reports. This time, the couple enjoyed a larger wedding joined by family and friends.

After their first wedding in Las Vegas, Bennifer exchanged their vows at the Argo star’s 87-acre compound outside Savannah. Several A-listers were in attendance for the wedding that had a strict all-white dress code.

While many have been applauding the Hollywood couple for rekindling their flame after calling off their initial engagement two decades ago, J. Lo and Affleck faced backlash after the public learned where they decided to get married.

Affleck hosted the lavish ceremony at his plantation-style home that was put on the market for $8.9 million in 2018, NY Post reports. The Deep Water star lowered the price to $7.6 million the following year before deciding to take it off the market and keep the estate for himself.

The home was built in 2000 by Atlanta-based architect James Strickland to resemble a southern plantation. It also includes a 10,000-square-foot guest house and equestrian facilities. Even more disturbing findings reveal that the home was built on land owned by a slave owner and plantation manager Roswell King, The Cut reports.

Once social media caught wind of J. Lo’s plantation-hosted wedding, they ripped her and that Bronx block she made a hit song about to shreds.

“Plantation “style” weddings are just as sick & inappropriate as slave quarter AirBnB’s,” one Twitter user wrote. “They must be called out. Also, J. Lo is now officially a White Latina. No one with a real black abuela would co-sign this Gone with the Wind B.S.”

“Ben Affleck and J Lo getting married on his plantation — lolololol love wins I guess!!!” another user said.

Ben Affleck and J Lo getting married on his plantation — lolololol love wins I guess!!! pic.twitter.com/ZET615nGGk

“I feel the same way about learning J.Lo got married on a plantation as I did when I saw her sing at Joe Biden’s inauguration. I want to know who is responsible for this,” added someone else.

I feel the same way about learning J.Lo got married on a plantation as I did when I saw her sing at Joe Biden's inauguration. I want to know who is responsible for this.

J. Lo and Affleck have remained silent amid the backlash. But that isn’t stopping social media from blasting Jenny From the Block and her Boston-native husband.