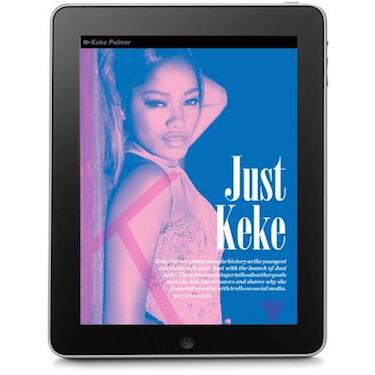 Palmer has been racking up accolades as she enjoys the debut of “Just Keke” on Monday, and her first cover as the magazine enters into the digital age. “This is such an honor,” she says. “JET magazine was always on the table in my family’s home and it’s great to be their first cover.”

After a 60-year run, Johnson Publishing has shuttered JET magazine in an attempt to resuscitate the brand for a new generation. Inside the digital issue, the actress chats about what it was like growing up on camera, her talk show idols, and dealing with social media drama. The interactive app promises to up the ante with video interviews, audio content, enhanced digital maps, and 3D images of the JET Beauty of the Week.

According to the publication’s press release, the first issue will also feature Stacey Dash, Trey Songz, Taraji P. Henson, and Anthony Anderson. It will also include a free introductory offer of 30 days for all subscribers.

Now that JET has gone digital, what do you think of Keke Palmer’s provocative cover? Voice your opinions below in the comments..