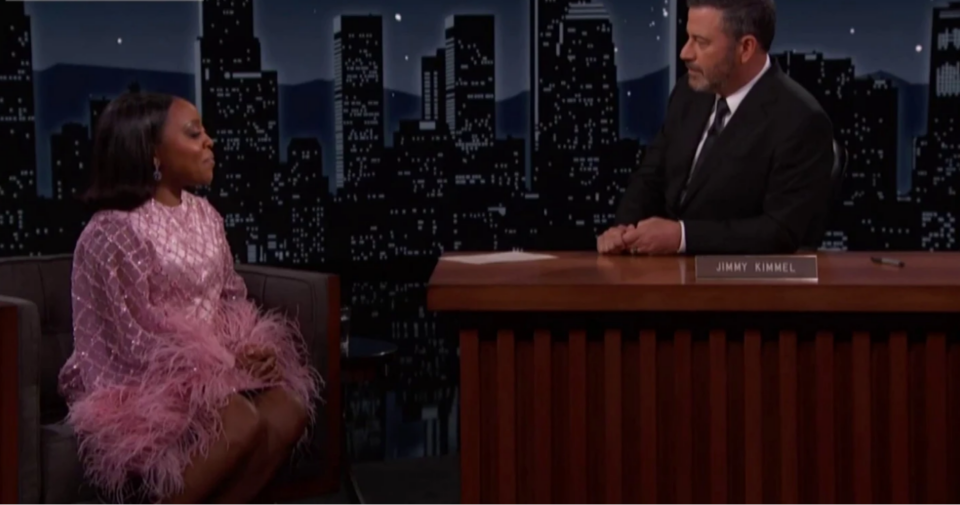 Jimmy Kimmel admits to “maybe” stealing Quinta Brunson’s moment at the Emmys and offered her an apology during her appearance on his late-night talk show.

Brunson stopped by the Jimmy Kimmel Live! show on Wednesday night and didn’t end up punching the comedian in the face like she jokingly said she would. Kimmel has been under fire for lying pretend-drunk on stage while Brunson accepted her first Emmy award.

The Abbott Elementary creator got a little revenge on Kimmel while he was delivering his monologue Wednesday night when she stepped out in a lavish pink gown with her Emmy award in hand.

“I just I have a little favor to ask,” she said. “So you know how when you win an Emmy you only have 45 seconds to do an acceptance speech, which is like not that much time.”

“And then … you get less time because someone does a dumb comedy bit that goes on a bit too long?”

Kimmel jokingly noted that he “heard of that happening in previous years.”

Kimmel made sure to give Brunson her personal moment, unlike on Monday. The late-night host stepped back to let the spotlight fall on the Emmy award-winning actress/writer.

Later in the night, Kimmel apologized to Brunson for his actions at the Emmys on Monday.

“That was a dumb comedy bit that we thought it would be funny,” he said.

“Then people got upset, they said I stole your moment. And maybe I did. I’m very sorry if I did do that. I did do that, actually. … The last thing I would ever want to do is upset you, because I think so much of you. I think you know that. I hope you know that.”

Brunson accepted the apology, telling Kimmel it was “very kind” of him following his behavior on Monday.

“Honestly I had a great night. It was a good night and a good time,” she said.

Brunson had just won for best comedy series and found herself accepting her first Emmy and sharing the stage with Kimmel. The comedian was lying flat on his back after being dragged out by fellow presenter Will Arnett because the late-night host was pretending like he had too many “skinny Margaritas.”

Kimmel gave Brunson a thumbs-up after she jokingly told him to “get up” because “I won.” But Kimmel stayed on the floor throughout her speech.

The comic has been under fire on social media for ruining Brunson’s moment, NPR reports. Abbott Elementary star and fellow Emmy winner Sheryl Lee Ralph took Kimmel’s actions as a sign of “disrespect.”

While on Kimmel’s show, the comedian jokingly blamed the bad comedy bit on Arnett. He went on to note how he’s never won an Emmy despite his many appearances on the award show.

“And I went one time and won,” Brunson said with a sarcastic smile.

Kimmel offered her another apology, adding, “I was dumb, and I’ve got news: It’s gonna happen again.”