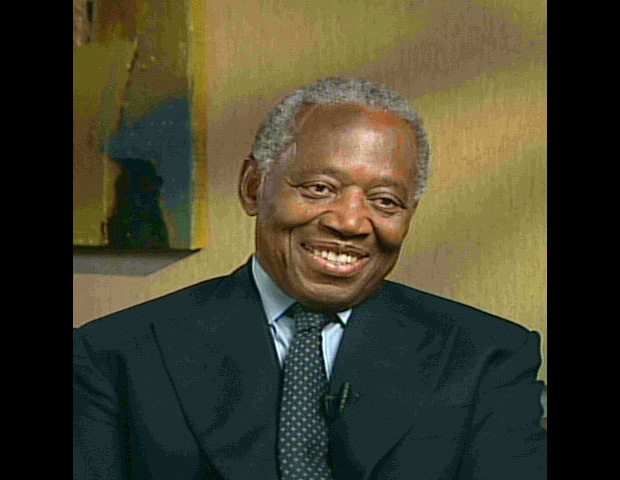 (Photo is courtesy of The HistoryMakers)

Business leaders, dignitaries, protégés, and citizens this week will honor John W. Barfield, the titan who built an empire that spanned manufacturing, engineering, and workforce management. At the same time, he created a new model for black business growth, fusing the traditional family-run business with successful, high-powered corporate partnerships. Barfield, who died Jan. 2 at the age of 90 of natural causes, used his acumen and influence to provide opportunities for black entrepreneurs and professionals as well as uplift the disadvantaged.

BLACK ENTERPRISE has chronicled his entrepreneurial ventures for more than three decades since the Barfield Cos., a diversified company based in sleepy Ypsilanti, Michigan, engaged in building maintenance, auto parts manufacturing, and engineering and design services, first appeared on the BE Top 100 in 1980, ranked No. 72 with gross revenues of $7 million. Within five years, the company was named the 1985 BLACK ENTERPRISE Company of the Year after its engineering and technical services subsidiary Barfield & Associates’ groundbreaking deal with the $500 million corporate giant Day & Zimmerman, which acquired a 49% stake, forming a new entity, Bartech Inc. “to reflect the repositioning of the firm in the high-tech marketplace.” The transaction enabled Bartech to become the largest black-owned technical services firms at the time and helped the family-run business grow 68% in one year to $17.5 million in revenues and jump to No. 56 on the list. By 2012, after a series of transactions and restricting, the parent—now renamed The Bartech Group Inc.—focused on workforce management, becoming the nation’s 18th largest black-owned industrial/service company with gross sales of $214 million.

In the June 2012 issue of BE, which commemorated the 40th anniversary of the BE 100s, our editors wrote that the Barfield Cos. and “the Bartech story represents the evolution of our list companies and their continuous innovation, smart management, familial succession, and focused wealth-creating exit strategies.”

The Tuscaloosa, Alabama, native and a descendant of sharecroppers used tenacity, contacts, and business savvy to transform a part-time janitorial service into one of the nation’s largest black global conglomerates. At an early age, he had a burning desire to become an entrepreneur. He quit high school before the 11th grade and, after a stint in the Army with assignments in Germany and France at the end of World War II, he returned to Ypsilanti and took a job as a janitor for the University of Michigan. Realizing his $1.75 an hour wage was not enough to support his wife, Betty, and growing family, he started a part-time cleaning service with university professors and administrators as clients. Eventually gaining business from General Motors and Burroughs Corp., Barfield quit his job and he and his wife launched J&B Cleaning (then renamed Barfield Cleaning Co.) in 1954. Due to it proficiency and meticulousness—Barfield created a manual on building maintenance and the first school to train custodians—the operation became so successful that it was acquired by the mammoth International Telephone and Telegraph Co. (ITT) 15 years later.

After his non-compete with ITT expired in 1975, Barfield, who served as a consultant for major corporations, re-launched his janitorial service. A pioneer of corporate minority supplier development programs, he started shortly thereafter Barfield & Associates, the forerunner to Bartech, with a staff of six community college students who upgraded engineering documents for one of GM’s plants, as well as Barfield Manufacturing Co., a parts supplier for GM, Ford, and Chrysler. Growing without government contracts, he took great pride that his company, GM’s 1982 Supplier of the Year, provided fasteners and transmission pins for most domestic models on the road.

As the company advanced, Barfield would bring his six adult children into the fold, including Jon, a Harvard-trained attorney who was one of the architects of the original Bartech deal and ran the company until 2012, to play critical roles in the business. He eventually sold the building maintenance firm and manufacturing company. After a major “liquidity event”  three years earlier, they decided to sell Bartech. Now, a division of The Impellam Group, the sixth-largest managed service provider worldwide, the Southfield, Michigan, operation employs more than 3,000; manages approximately 120,000 contract workers worldwide; and also manages approximately $4.7 billion in funds spent by its corporate clients, according to a company release. The youngest son, David Barfield, serves as its president and CEO.

Besides his business prowess, the low-key, elder Barfield will always be known for his commitment to giving back and developing minority talent. For instance, in the 1980s, he established the Lena Barfield Memorial Trust Fund, named after his mother, to assist black high school graduates from low-income families and created a drafting program with GM to increase the number of minority automotive engineers. According to a Bartech release, in the 1990s, he and his wife also developed  Share Products Co., an entity that sold 10 consumer products in major grocery stores throughout the Midwest and used 50% of profits for organizations that helped the homeless. Moreover, they supported UNCF, Spaulding for Children, the Rotary Foundation, and the Parkridge Community Center in Ypsilanti. In an interview, Barfield told BE his philanthropic philosophy: “I always believed people were more important than profits because without people, you don’t have any profits.”

Among his numerous awards, it was fitting that Barfield was recognized with BE’s highest entrepreneurial honor in 2003: The A.G. Gaston Lifetime Achievement Award, named after the legendary black entrepreneur from his home state who became his hero. Today, Barfield represents a source of inspiration for generations of black entrepreneurs and professionals as well.