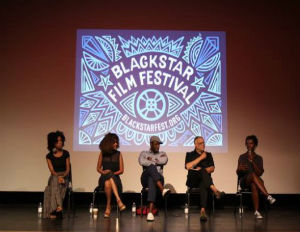 From July 30 – August 2, the BlackStar Film Festival returnsÂ toÂ Philadelphia to celebrate all things cinema with a focus on highlighting “films that are often overlooked from emerging, established, and mid-career directors, writers, and producers working in narrative, documentary, experimental, and music video filmmaking.” Various events will be held at venues throughout the city.

[Related: Black Hollywood Talent Talk Careers and the Politics of the Hollywood]

According to a press release statement, the 60+ films featured in the BlackStar Festival hail from over four continents around the globe, and each are conceptualized and produced by independent filmmakers of African descent. “BlackStar is a festival intended to highlight and celebrate work by filmmakers of African descent who are creating cutting-edge, genre-defying work that often gets overlooked by mainstream platforms,â€ said Maori Karmael Holmes, founder and artistic director of the festival. “In this time where we are fighting to show the world that black lives matter, we also want to be a festival which champions and creates space for black stories.â€

The 3-day event features an exciting line-up of events–from live Q & A, workshops and youth screenings to award ceremonies and after parties. Here is a snapshot of what you can expect:

Panel: Black Women & Indie Film – This panel will explore the experiences ofÂ black women directors and producers as storytellers and bridge-builders in the industry, how their identity has impacted their work, and why they think it’s important to claim space in film. Panelists include: director/producer Loira Limbal (Estilo Hip Hop), director/producer Denise Greene (I’ll Make Me A World, Malcolm X: Make it Plain), Filmmaker Frances Bodomo (Boneshaker, Afronauts), and Curator/Producer Elissa Blount-Moorhead (Dreams Are Colder Than Death).

Life’s Essentials with Ruby Dee – Directed by Muta’Ali Muhammad, the documentary is about family, art, and activism and tells the story of one of the most iconic couples of our time–Ruby Dee and Ossie Davis–through the eyes of their grandson Muta’Ali. This open letter from one generation to another follows Muta’Ali’s fight to learn from and preserve their values and wisdom.

Closing Awards – Hosted by English Rapper and Radio Personality, Monie Love, and The BlackStar, Closing Awards is the highly anticipated finale for the festival. The show will feature special guest presenters and musical performances by Ethel Cee, Navasha Daya, Norvis Jr., Muhsinah, and Phonte, backed by an ensemble directed by Luke O’Reilly and DJ Mr. Sonny James on the ones and twos. Dream Hampton will also receive the Richard Nichols Luminary Award.