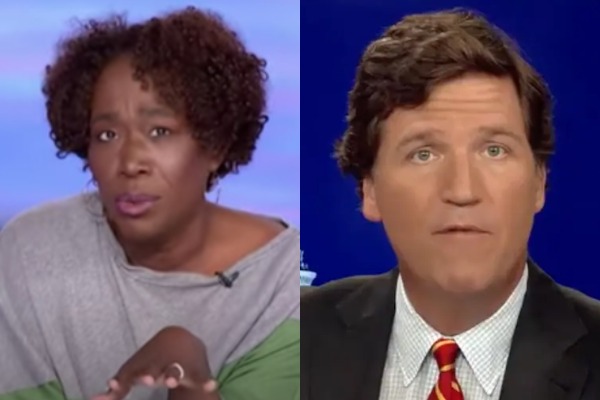 Joy Reid issued out a scathing read of Tucker Carlson after the Fox News anchor referred to her as “the race lady.”

The MSNBC host took to her show The ReidOut on Tuesday to respond to Carlson repeatedly referring to her as “the race lady” and touting her Harvard background among other jabs, Huff Post reports.

While playing a montage of clips that showed Carlson claiming that Reid used race to bait people despite living “an unusually privileged life,” Reid blasted his “race lady” term as a dog whistle aimed at riling up his viewers. She also accused the conservative news host of “making America worse,” the Daily Beast reports.

“At least three times in last month, Tucker Carlson took time off from badgering strangers in parks and bouncy houses to demand they show him their children’s unmasked faces to refer to moi as the ‘race lady’!” Reid said. “‘The race lady’? Why’d he call me that? I used to run track in high school but honestly, I’m not that fast. What else could it be? Hmm.”

She went on to list out some of “Lil’Tucker’s” past failures including his MSNBC show being canceled to being humiliated on CNN during a 2004 interview with Jon Stewart. This was in response to Carlson repeatedly bringing up her Harvard degree.

“I mean, when you recently went off on me for continuing to mask up post-vaccine while jogging in crowded Central Park, you weirdly threw in my attending Harvard. And I don’t know, maybe I’m sensitive to this stuff, but it felt kind of like a dog whistle,” she said.

While addressing Carlson’s possible assumption that she got into Harvard because of “affirmative action,” she credited her college education to having “had a really high GPA and fantastic SAT scores.”

“But you’re fine! Thinks are going GREAT for you,” she continued. “And about that race thing, I’m not the one who spools over my neighborhood ‘changing’ like I’m some segregationist housewife from the 1950s! That would be you, Tuckums!”

With the new news anchor’s argument being rooted in the mask debate, it’s safe to say Reid’s response won’t be the end to their on-air feud.