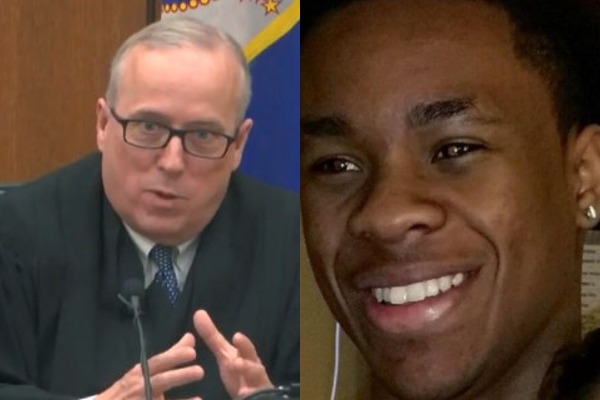 Amid outrage over the recent police shooting of 22-year-old Amir Locke, it’s being reported that the judge from the Derek Chauvin trial might’ve been the one who signed off on the no-knock warrant that led to his death.

A spokesman for the Hennepin County District Court confirmed that Judge Peter Cahill was the signing judge last week who reviewed and signed off on applications for search warrants, NBC News reports. Officers fatally shot Locke last Wednesday during a no-knock warrant search that he wasn’t even named in.

The community in Minneapolis has been protesting Locke’s death following the unrest over George Floyd’s murder and the fatal police shooting of Daunte Wright.

“The warrant granting authority to search the apartment is not publicly available so the Court cannot comment whether Judge Cahill specifically signed that application,” the spokesman, Matt Lehman, said.

Cahill is no stranger to the media spotlight after he was selected as the judge to preside over former officer Derek Chauvin’s trial that ended with his conviction on charges of second-and third-degree murder and second-degree manslaughter in the death of George Floyd.

“Judge Cahill cannot comment on this particular application or any application for a search warrant because the Minnesota Code of Judicial Conduct (Rule 2.10) prohibits judges or Court staff from commenting on active or pending cases,” Lehman said.

Locke’s family has since hired civil rights attorney Benjamin Crump to seek justice in Locke’s death. Crump has been at the forefront of recent civil rights cases, including representing the family of Breonna Taylor. The latter was also killed during a botched police raid on her apartment in March 2020.

“Like the case of Breonna Taylor, the tragic killing of Amir Locke shows a pattern of no-knock warrants having deadly consequences for Black Americans,” Crump said.

“This is yet another example of why we need to put an end to these kinds of search warrants so that one day, Black Americans will be able to sleep safely in their beds at night.”

Locke was sleeping on the couch in the apartment where police conducted the raid. His mother, Karen Wells, said he was preparing to relocate to Dallas to be with her. Bodycam footage released last Thursday shows Officer Mark Hanneman kicking the couch and jolting Locke awake before the 22-year-old grabs the nearby gun that he legally owned, HuffPost reports.

Hannaman fired three gunshots at Locke, killing him about nine seconds after police entered the apartment. Locke’s parents say his death was an “execution.”