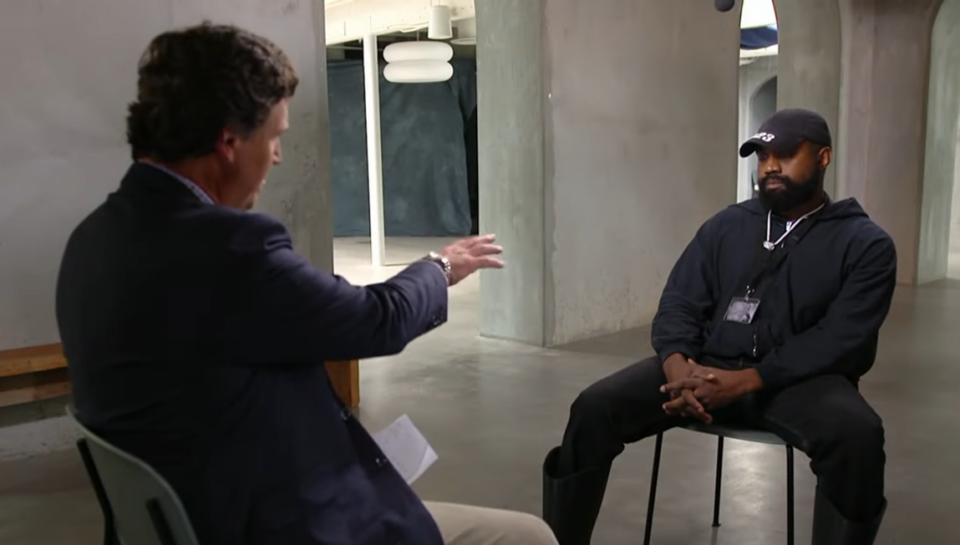 According to Business Insider, during the interview, West recalled a 2019 phone call with Donald Trump—who was president at the time—concerning fellow rapper A$AP Rocky, who was in jail in Sweden on assault charges. West called Trump to discuss helping him get A4AP Rocky out of jail and back to the U.S.

“And one of the things he said to me is, ‘Kanye, you’re my friend. When you came to the White House, my Black approval rating went up 40%,'” West told Carlson.

During the Interview, West also explained the reasoning for wearing a White Lives Matter sweater along with Republican pundit Candace Owens during a Yeezy fashion show in Paris.

“The answer to why I wrote White Lives Matter on a shirt is because they do,” West said. “That’s the obvious thing.”

West continued, saying the sweater was controversial because “The same people that have stripped [us] of our identity and labeled us a color have told us what it means to be Black and the vernacular we’re supposed to have.”

In his interview with Carlson, the College Dropout rapper also touched on atheists, claimed more Black babies are being aborted than born in New York City, why he’s pro-life, and his relationship with former President Donald Trump and the backlash he’s received for it.

“My so-called friends and handlers around me told me if I said I like Trump, my career would be over, my life would be over, they basically said that I would be killed for wearing the hat,” West told Carlson.