Kanye's $350 Sneakers Restock After Selling Out 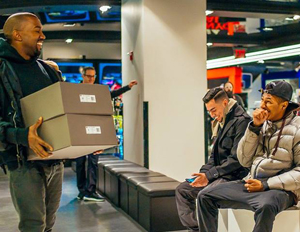 Kanye West may need to work on his award show etiquette, but one thing the controversial rapper has mastered to perfection is the marketing of $350 kicks. West released his new Yeezy 750 Boost for Adidas during New York Fashion Week and the couture sneakers sold out. Adidas only made 9,000 pairs available.

Many Kanye fans and sneaker fanatics actually reserved their Yeezys ahead of time using a smartphone app. A few of theÂ lucky customers showed up to their footwear stores and were pleasantly surprised when they discovered the maker himself, Mr. West, hand delivering their shoes.

According to CNN Money, immediately after the shoes hit the shelves they were selling at a significantly high markup online. “On eBay, the Yeezy Boost was selling in excess of $1,000 a pair,” the source reports.

Fortunately, for Kanye’s loyal following who desperately want the fresh kicks but don’t have a grand to shell out, they can now get them this weekend for much less, but still pricy. The sneakers will restock this Saturday, February 28. Kicks on Fire announces thatÂ theÂ Yeezy Boost collectionÂ will be available through “adidas Consortium accounts worldwide, as well as adidas Originals flagships in Berlin, Seoul, London and Shanghai.”