Kelly Rowland and Father Open Up About Reconnecting After 30 Years 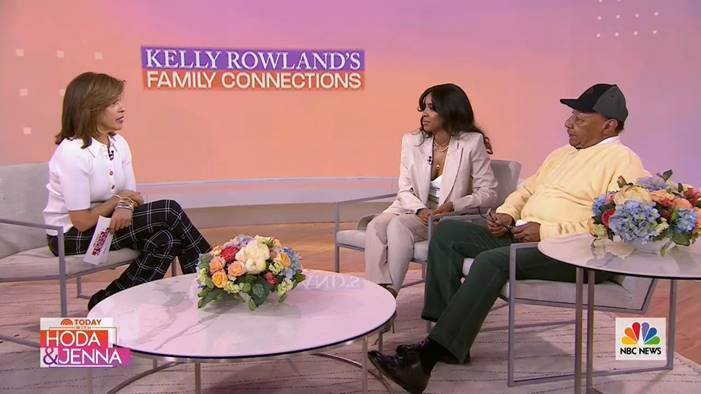 Kelly Rowland guest co-hosted TODAY with Hoda & Jenna this morning where she shared exclusively for the first time her story of forgiveness and reconnecting with her estranged father after 30 years.

Rowland shared with Hoda Kotb, “My understanding of where my dad was as a kid was that he was not really ready as a father. I was angry at him. I was disappointed in him. I had all of those feelings of abandonment. I think as a kid you just feel like if they’re not there they don’t want to be here. So that’s what I felt and that feeling sucked.”

Her father, Christopher, also joined in studio sharing, “People used to tell me, ‘I saw your daughter,’ and I used to sit there and say, well, I didn’t, and it used to hurt. So when Kelly started performing in certain places, I followed her. And when I did go to a couple of places, I didn’t get a chance to see her because security wouldn’t let me see her. It was sad really.”

He added, “I wanted to tell Kelly that I love her and that I never gave her up.”

The two expressed their gratitude and love for their new rekindled relationship. Rowland said, “I can only imagine what it felt like to have everything that you want to say for so many years to your child, I just allowed him the space, and it was incredible. Underneath all of the disappointment and hurt and anger and fear, that’s somebody you love.”