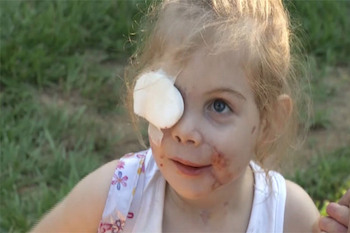 The Kentucky Fried Corporation is investigating allegations that a restaurant employee in Jackson, Mississippi, asked a 3-year-old to leave because her facial injuries disturbed other patrons.

Victoria Wilcher and her Facebook page, “Victoria’s Victories,” alleged the following after posting a picture of the child’s latest recovery from a vicious pit bull attack in April. The photo features the child smiling shyly in spite of her prominent facial scars and cartoon-decorated eye patch.

The caption read, “Does this look scary to you? Last week at KFC in Jackson MS this precious face was asked to leave because her face scared the other diners.” Seemingly in response to the viral outing, KFC has given the child $30,000 toward her medical bills, a spokesman said Sunday (June 15).

“She won’t even look in the mirror anymore,” Victoria’s grandmother Kelly Mullins said. “When we go to a store, she doesn’t even want to get out” of the car. KFC quickly issued an apology the next morning after being outed on Facebook, writing in an emailed statement, “As soon as we were notified of this report on Friday, we immediately began an investigation, as this kind of hurtful and disrespectful action would not be tolerated by KFC.”

Victoria’s grandmother had just been to a doctor’s when they stopped at the restaurant. They ordered mashed potatoes because Victoria could better digest the soft food without needing to chew. Moments after ordering, the duo was approached by an employee and was told, “We have to ask you to leave because her face is disrupting our customers.”

The 3-year-old cried all the way home and is now embarrassed by her appearance–something that wasn’t the case before.