Is Kevin Durant Signing With Roc Nation Too? 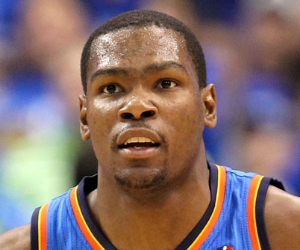 Can we say power move? It looks like The Roc is getting stronger by the week!

Oklahoma City’s Kevin Durant, according to a report on Hip Hop DX, will be signing with Jay-Z’ sports agency. The primary reason the NBA player is doing so is to build his brand, as he is signed through the 2015-2016 season.

One of the better players in the league, Durant already has endorsement deals with Nike, Gatorade andÂ Sprint, among several others. If and when Durant does sign with Roc Nation, he will be joining a roster that already has the likes of New York Yankees’ Robinson Cano, New York Jets’ Geno Smith and Tulsa Shock’s Skylar Diggins.

If this signing does go through, The Roc Nation sports agency may be a real force to be reckoned with.