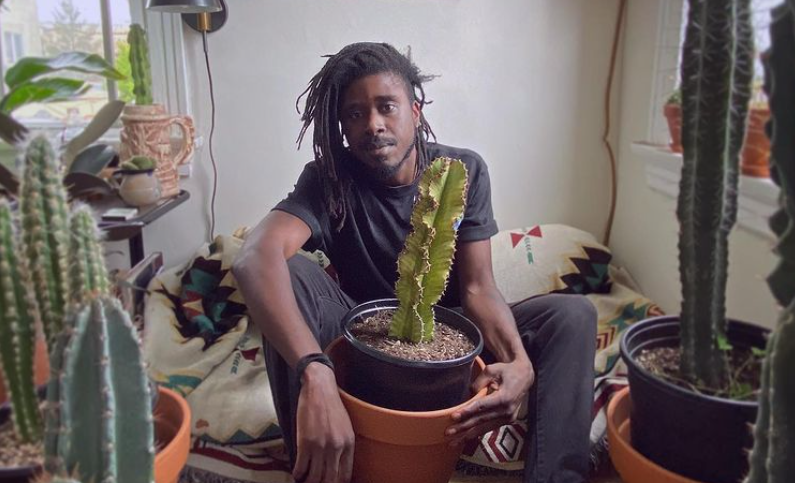 Los Angeles-based artist Nelson ZêPequéno, is the visionary behind the viral Instagram page @BlackMenWithGardens. The page boasts over 130,000 followers, where he shares eye-catching shots of Black men and boys planting, harvesting, and being at one with nature.

ZêPequéno works as an artist, production designer, and entrepreneur but feels his company’s Instagram page is a part of his life’s calling. He already sells customized t-shirts with flowers and plants embroidered on them through his Plants & Anime platform. The site also sells custom art, handheld florals, and clock planters. His gardening Instagram page only confirms the authenticity of his overall brand.

“It’s to solve creative problems in only a way that I can uniquely,” he told The los angeles times.

The page highlights the personal connection and stories Black men and boys share with gardening. Running the page has helped the artist tap further into his creative vision and purpose. He has been an artist since a child after immigrating to the United States from his native Ghana.

A post shared by Black Men With Gardens (@blackmenwithgardens)

“My big sister when I was younger, she’d just like draw better than me,” ZêPequéno said of his childhood. “And I just wanted to be able to draw better than her. So I decided to get better.”

As he grew older, he became inspired to create art using everyday objects in ways the average person wouldn’t think of.

“I had this overall vision that I could live my life based off of things that I created with my mind and hands,” he said.

He took a liking to plant life 10 years ago after he noticed the taboo many had around cannabis culture.

“I started growing weed and learning cannabis horticulture indoors and outdoors,” he explained. “That just gave me an overall appreciation of admiring plants because growing cannabis requires you to really observe them on an almost microscopic level.”

Now his love for art, plants, and being true to his creativity has earned him a career and a cult following on social media.