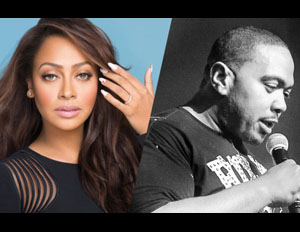 According to reports, actress, author and producer La La Anthony, and Grammy-winning producer Timbaland are teaming up to develop a hiphop-focused docuseries.

The project centers on the story of Jeff Janvier and Session Cruz’s Face Time Agency, the a leading casting agency for booking music video and hiphop fashion models. The company’s clients include Drake, Kanye West and Robin Thicke, and the show will be set inside the New York City nightlife scene. The series will expose the entrepreneurial side of hiphop, highlighting the hustles of models, DJs and social media stars who seek to become fashion, music and media moguls.

“La La and Timbaland are perfect examples of what can be achieved when talent, determination and creativity collide with entrepreneurship,” Leftfield Entertainment CEO David George told Deadline. “We’re thrilled to be in business with these two entertainment innovators to create a series that uncovers a unique, rarified faction of hip hop and provides a true soundtrack for the unpredictable journey toward fame and fortune.”

“I’m thrilled to be executive producing a project that offers a true insider’s look into the business side of hip hop, especially one that explores the lives of fascinating women who have used hip hop as their platform to become successful entrepreneurs in fashion, music and more,” said Anthony.

This project adds to both Anthony and Timbaland’s hot entertainment resumes, as Anthony’s book, The Love Playbook: Rules for Love, Sex, and Happiness, has been a best-seller and she’s had a mainstay role on hit show, “Power,” and Timbaland’s awesome run as producer for “Empire.”