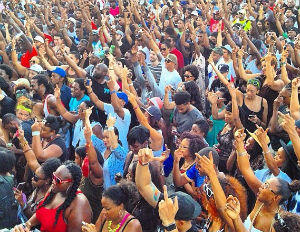 Over the last 6 years ONE Musicfest has pulled together the best of urban alternative legends and contemporaries for a unique experience through music and visual. And this year it gets even better, with ONE Musicfest in partnership with Live Nation, “pulling out all the stops with an outdoor music festival that the media says, can’t be missed, and attracting a generationally and culturally diverse audience.Â ”

Beyond festival-goers having a good old-fashion time at the ONE Musicfest, Jason Carter, the founder of ONE Musicfest, told Black Enterprise.com exclusively, “I want people to walk away knowing that it’s possible for us all to share the same space. ONE Musicfest is a generational festival. Â It’s nothing to see a 17-year-old enjoying music along with someone in his or her late 40’s partying just as hard. So many times I think that’s overlooked with festivals. Some people will say, “That’s a young persons festival or that’s old school.â€ But the way we set up ONE Musicfest is so different–people jump up and dance when they hear a classic New Edition song and in the same breath once they hear the first drop on Kendrick Lamar, they’re bopping their head just as hard.

“The other WIN for One Musicfest is how we’ve brought progressive urban music to the stage. You never see Lauryn Hill on the same bill as Big Krit, but interestingly enough they’re fans of each other, but never get a chance to celebrate each other’s music together. So when they get backstage, they’re snapping pictures together and sharing them on Facebook and Instagram.â€

According to a statement released by One Musicfest, the festival will take place on multiple stages and will serve as the ultimate mashup of innovative urban alternative acts with over eleven hours of non-stop music. The festival will feature over 25 of the hottest global DJs whose music crosses over to all spectrums, local vendors, games, and interactive activities. One Musicfest is the only place to see this roster of incredible acts join together for One purpose Â – which is to witness a wide variety of sounds, from rock to hip-hop, electro, reggae, funk, disco, house, alternative and soul while having your musical senses stimulated.

Founded by Jason Carter, ONE Musicfest has been one of Southeast’s largest home-grown, musical arts festivals to date including over 10,000 plus attendees. Carter has brought Atlanta music lovers the best and the brightest urban alternative acts performing in a welcoming, hospitable setting, creating an atmosphere where everyone can enjoy and discover music.