Lawmakers do 'Hands U, Don't Shoot' Gesture on House Floor 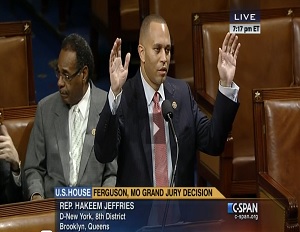 On Dec. 1, lawmakers and members of the Congressional Black Caucus led a one hour discussion on the House floor about the issues in Ferguson and what the decision means for our nation’s justice system in a session titled “Black in America: What Ferguson Says About Where We Are and Where We Need to Go.”

Taking the floor to discuss the issues at hand were Rep. Hakeem Jeffries (D-NY), Rep. Yvette Clarke (D-NY), Rep. Sheila Jackson Lee (D-Tex.) and Rep. Al Green (D-Tex.) who all made a “Hands Up, Don’t Shoot” gesture during their remarks, which has become a national symbol for the solidarity and outrage over the death of Michael Brown.

Jeffries, Clarke, Lee and Green all expressed how citizens are fed up with a broken criminal justice system that does not value the lives of black Americans and that it’s time for an immediate reform to take place.

“Now this is a problem that Congress can’t run away from and the [Congressional Black Caucus] stands here today to make sure that Congress runs toward the problem,” Rep. Jeffries said. “That we come up with constructive solutions to breaking this cycle, this epidemic, this scourge of police violence all across America.”

The lawmakers also praised the team members from the St. Louis Rams who did the “Hands Up, Don’t Shoot” gesture on the field during their game Sunday night.

Since last week’s announcement of the grand jury’s decision to not indict Darren Wilson, continued protests, riots, and walkouts have taken place across the country with some having mixed emotions about the way people are responding to the verdict. But during her remarks on the House floor, Rep. Clarke made it clear that the outcry is simply a sign of American citizens being fed up with injustice.

“To all Americans who are disturbed by the protest, I say to you ‘No Justice, No Peace.'”