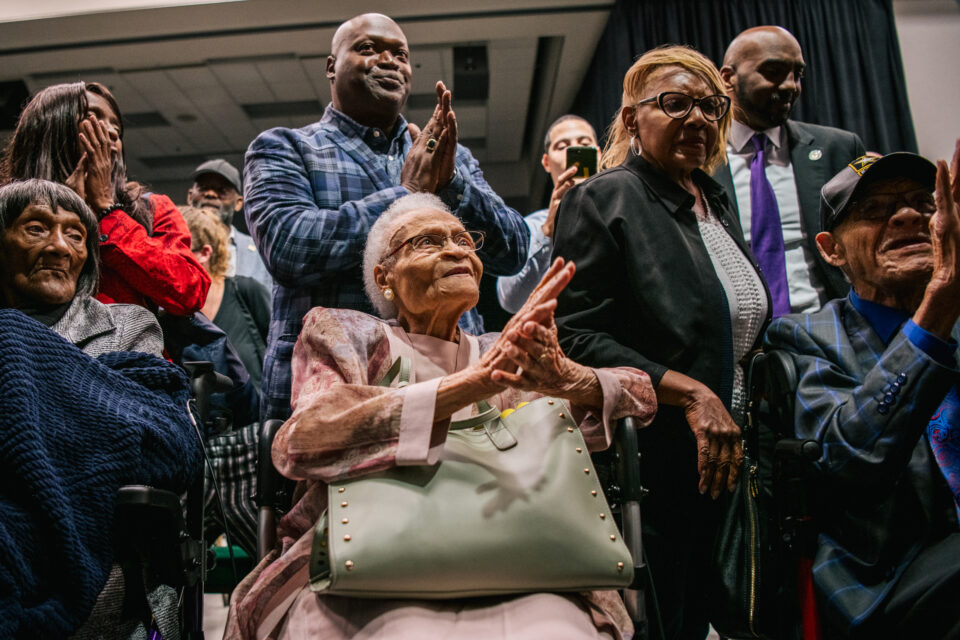 Survivors Lessie Benningfield Randle, Viola Fletcher, and Hughes Van Ellis sing together at the conclusion of a rally commemorating the 100th anniversary of the Tulsa Race Massacre in June 2021. (Photo by Brandon Bell/Getty Images)

Family members who are descendants of and survivors of the 1921 Tulsa Race Massacre may have some legal recourse soon after Tulsa County District Court Judge Caroline Wall ruled Monday that a lawsuit seeking reparations for the rampage can move forward.

Civil rights attorney Damario Solomon-Simmons filed the lawsuit in 2020 under the state’s public nuisance law. He sought a speedy decision due to the age of several of the plaintiffs, Lessie Benningfield Randle, 107; Viola Fletcher, 107; and Hugh Van Ellis, 101.

“We believe this is the last opportunity for these survivors to have their day in court,” Solomon-Simmons said, . “We want to ask (the judge) to move forward and move forward as soon as possible.”

The racist rampage was carried out by a white mob on June 1, 1921, that killed hundreds of Black people and burned the city’s prosperous Greenwood district to the ground. The centennial of the event was acknowledged at several events in the city last year.

At one, Rev. William Barber II said, according to Oklahoma Watch, “The only way we can honor those that were killed and murdered is we must be more powerful than even they were so that nothing like this ever happens again in public policy or in public violence.”

The 100-year-old event is also still affecting Black homeownership in the city.

Solomon-Simmons’ suit claims the damage is ongoing, a fact disputed by Chamber of Commerce attorney John Tucker who told the Associated Press, “What happened in 1921 was a really bad deal and those people did not get a fair shake…but that was 100 years ago.”

The city and many insurance companies never fairly compensated the victims. The lawsuit claims that city and county officials actively thwarted the community’s effort to rebuild and neglected the Greenwood and predominantly Black north Tulsa community in favor of overwhelmingly white parts of Tulsa.

In addition to the Chamber of Commerce, other defendants include the Tulsa County Board of County Commissioners, Tulsa Metropolitan Area Planning Commission, Tulsa County Sheriff, and the Oklahoma Military Department.