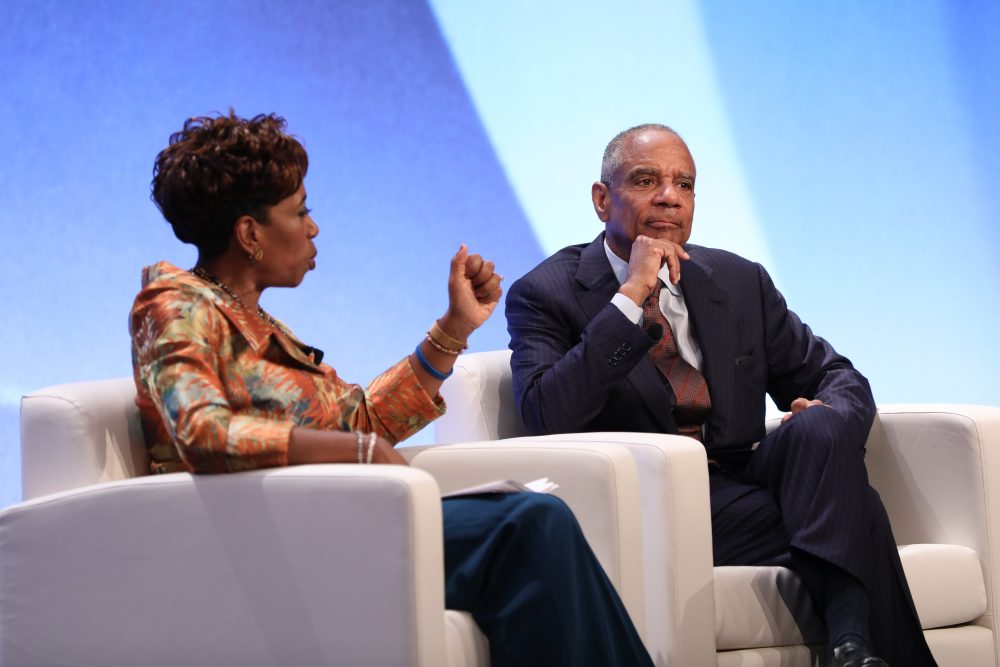 At the Senior Multicultural Leaders Conference, hosted by Morgan Stanley, top executives gathered to learn about the latest business, financial, and political trends to effectively navigate in an era of change and uncertainty. One of the most valuable elements of this year’s event, recently held at the Pierre Hotel in midtown Manhattan, included master classes on leadership from two of the best chief executive across generations: Former American Express Chairman and CEO Ken Chenault and former Time Warner Chairman and CEO Richard “Dick” Parsons. Drawing from their experiences managing complex organizations against the backdrop of tumultuous events and business transformation, both shared examples, perspectives, and philosophies with attendees.

Carla Harris, Morgan Stanley’s vice chair, Wealth Management and head of its Multicultural Client Strategy Group, interviewed Chenault, who spent 17 years as CEO of AMEX—the longest term of any head of a major publicly traded corporation. Harris focused on the period in which he led AMEX during 9/11—the terrorist attacks occurred during his first year as CEO—and huge employee cutbacks he made to steer the company back on course in its aftermath. Harris talked with the courageous leader about crisis leadership and making “compassionate but decisive” decisions. Moreover, she also asked Chenault, now chairman of VC firm, General Catalyst and board member of Facebook and Airbnb, about getting organizations to adapt to internal and external change. Here are the edited takeaways from that conversation with Harris and Chenault, who will receive the Earl G. Graves Sr. Vanguard Award at Black Men XCEL at PGA National Spa & Resort Labor Day weekend:

On first response to crisis:  [9/11] was one of the most horrific situations that the world and the country has faced and that was my first year as CEO of the company. One of the things that I believe in strongly and it is a leadership mantra that I literally think about every day is that the role of a leader is to define reality and to give hope. I was shocked as anyone would be and then I thought first of the people—people in the World Trade Center, people in the world, our employees, our customers—and what could we do. I talked to [our top leadership team] about what our responsibility was. I said, “That this is the most incredible crises that probably any of us will ever face but our job is we have to be compassionate leaders and we have to be decisive. What we need to understand is that if we fail, we will lose the privilege to lead. That’s a reality…not a threat. But what you need to understand is that you can’t lose your cool;  you have to keep your composure in a leadership position. People will be empathetic but they won’t follow you if you don’t keep your composure. The next thing I said was that I will do anything in my power to support them, work with them but what we need to focus on first is what we could do to help people. Whether they were American Express customers or not, we were going to help people around the world.

On making tough financial decisions:  Leaders should not be cavalier when they talk about cost reduction. The decisions that I had to make were painful because what I understood was I was impacting the lives of people. I wanted all the leaders to understand that there was not a thing that anyone did to deserve losing their jobs; it was the circumstances. You’re talking about people. You have to have real reasons and at the same time, you have to take care of the people you’re impacting.

On embracing innovation: Most people and, it’s natural, are really scared of change. What you have to communicate, emphasize, and demonstrate is to embrace change. If you want to be a leader and lead as a company, you have to constantly challenge the status quo. One of the points I often made in the company is that we want to become the company that puts us out of business. When I would pursue certain initiatives, people would say that this may cannibalize the business. I said, “You’re right. It might cannibalize the business. Do you not think our competitors are not talking every day about what they are going to do to us?” So it is critical to create a galvanizing vision of why people should change. The change should not be [due to] competitive threats. if you change because you’re scared, chances are you are going to have a problem. If you really want to be an innovator, you have to be very customer-centric, have the willingness to do some of the things to challenge the status quo, and have the willingness to have people say, “I don’t know why they’re doing this; they can fail.” Let’s be very clear and understand all possibilities and all contingencies needed to be dealt with but this relentless drive to innovate is something that I emphasize. And then what you have to do within the organization, not by hierarchy, is take ideas from every level and support those ideas.

DICK PARSONS: LEADERS MUST BE AUTHENTIC

CBS News Correspondent Michelle Miller interviewed Parsons, who has always been the “go-to guy’ when companies—and our nation—have been in periods of distress. Among the numerous roles of this unflappable leader: Taking the helm of AOL Time Warner as the media giant was reeling from a troubled merger during the height of the dotcom boom; serving as chairman of Citigroup as the financial giant was recovering from the sector’s financial meltdown; lending his expertise to U.S. presidents over the years in tackling dire issues ranging from Social Security reform to job creation during the Great Recession: helping to resurrect the famed Apollo Theater at a time in which it was financially crippled; and assuming the role of  interim CEO  to stabilize the L.A. Clippers NBA franchise during the Donald Sterling scandal. One of the reasons Parsons has been selected the skipper to steady ships in choppy waters has been his sound judgment and vast experience in politics, finance, entertainment, and philanthropy, which has given him the ability to connect with individuals in any field of endeavor—from world leaders to recording artists. Given that history, Parsons, a senior adviser of Providence Equity, shared his views on how senior leaders can succeed during what he calls times of “ever-accelerating change” in his usual, direct fashion. Below are edited excerpts from that conversation:

On using every experience to advance: My belief is that success breeds success. Whatever job you take, knock the socks off that job. It will lead to something else. In my case, it happened to lead to positions of leadership in corporate America.

On crisis management: Some people sense when things are changing; when things are on the move. With some degree of one foot in where we are today and one foot where we may be going tomorrow, those people can span that change and keep things on an even keel. I believe leadership comes in all varieties. It is as individual as a business card. Some things cut across though. Folks looking for leaders in time of change, look for someone who is steady, someone who does not react without reflection. They are looking for someone who is confident in making decisions. Another thing is authenticity, a word that hasn’t been vocalized enough, I’ve been in a lot of situations when a bunch of people are looking to you as a leader. Being authentic is the only way you can establish trust. Lastly, never panic. People make the worst decisions when they panic. It doesn’t stop people from doing it. I don’t.

Communication is key: I read an article in a magazine for corporate directors and they asked people the key qualities they were looking for in a CEO during succession. No. 1 was communication. Not only tell people what is happening but make sure they get it. You have to tell people the same thing in different ways. Be clear to whomever is on the listening end. You have to give the big picture—this is where we are trying to go, this is what we are trying to do, this is what we are going to do without—and this is your piece and how it fits in with everything else. As a leader, you have to be sufficiently attuned and sensitive to who the audience is and how to communicate to that audience. Not everyone hears things the same way.

Set aside ego: What matters to me is winning not personal aggrandizement. I much rather win together than stand out while everybody else is losing. You subvert your ego for the larger purpose. I get satisfaction in winning as a group.