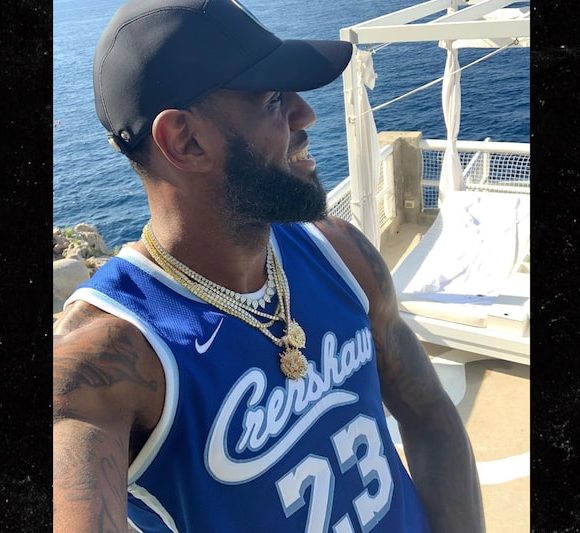 Los Angeles Laker LeBron James posted a photo of himself on Instagram wearing a custom Compton basketball jersey with his own number, 23, and “Crenshaw” written on the front. In the caption, he dedicated a message to the slain rapper.

I know you smiling down back at me my G! The Marathon will Always Continue all around the world with me! #TMC💙🏁 @nipseyhussle @laurenlondon 🙏🏾 No 🧢

The custom jersey was inspired by Lakers fan and digital artist Grant Goldberg. Its color scheme matches the theme of the blue uniforms that the Lakers wore early in their franchise history.

Nipsey Hussle was murdered in front of his clothing store, The Marathon Clothing, on March 31, 2019. Reputed gang member, Eric Holder, has been charged with Hussle’s murder and the attempted murder of two others. Days after the killing, LeBron wore a t-shirt at an NBA game honoring the fallen artist.

Former NBA player Caron Butler suggested back in July that the Lakers and Clippers should honor the legacy of Hussle at the season-opening game taking place on Oct. 2 at the Staples Center.

Can you imagine pulling up to @STAPLESCenter on a Friday night!@LAClippers is #Red #Crenshaw uniforms @Lakers in #Blue #Crenshaw uniforms honoring @NipseyHussle and UNITY. Along with a hell of a Game on display 🔥🔥🔥🏁
#ILoveThisGame#ThinkingOutLoud https://t.co/w0mf2YUIol

Nipsey Hussle’s legacy is being kept alive through the sales of his partnership between The Marathon Continues Collection he partnered with Puma on. The clothing line sold out in a day due to the rapper’s popularity.