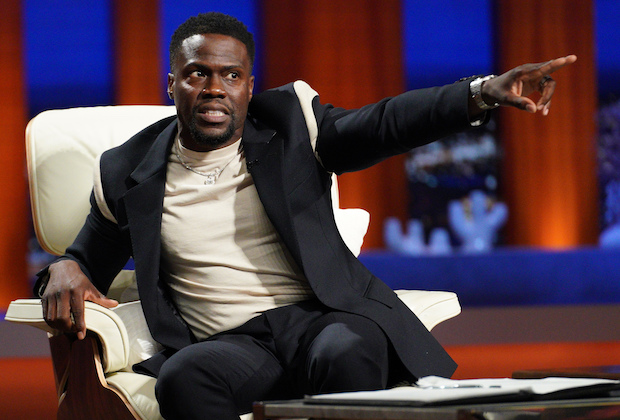 (Image: Shark Tank/ABC)
A highly successful comedian and savvy entrepreneur, Kevin Hart is also known for his astute investment skills and strong advocate of wealth building.
Worth an estimated $200 million, Hart, an actor and producer, stubbed his toe a few times in the business space and gained knowledge from his blunders.
A guest Shark on ABC’s Shark Tank last Friday, Hart talked about how he denied an offer from a company called Candi, which calls itself a social network allowing fans to meet and greet their favorite celebrities and influencers. Hart reportedly decided not to join forces as an investor based on past personal experience, CNBC reported.

“A lot of mistakes early on in my business career were made in that space,” Hart said after turning down the founders’ pitch.

“All based off of, ‘Oh, said person has this many followers. If we get them to do this, then this is going to be a success. That’s not true.”

According to CNBC, Keithan and Quiante Hendrick started their company in Chicago in April 2020. The married couple reported their “business made over $100,000 by connecting fans to influencers and entertainment stars via live video calls.”

“The talent — which reportedly included famous TikTokers to Grammy-winning artists like Chaka Khan — established their own fees for five-minute-long chats. The talent got to keep 75% while the Hendricks retained 25% of earnings.”

Yet, Candi had no “traditional forms of marketing when filming occurred.”

“That meant the company’s promotion completely relied on promotion from its 350 celebrities,” CNBC reported.

Based on his experience, Hart said Candi’s dependence on endorsements meant the company did not have “an engine.”

“The talent pool is going to guarantee your return, which is where I’m having trouble because these [platforms] have existed before,” Hart said.

“The reason why they come far, few and in between in a place of success is because they fall apart.”

Hart added “their pitch of $500,000 for 15% equity was “extremely aggressive,” per CNBC. Other Sharks agreed, and Mark Cuban called the request a “fundamental Shark Tank mistake.”

The Hendricks did not gain an offer from any of the Sharks but felt they learned from the event.

“We do regret the amount of the ask, but it was great just meeting Kevin Hart,” Keithan said per the CNBC report.

“Any time you have a guest Shark like that, that can give you such invaluable advice — I feel like we just got a free consulting session.”

However, Hart did decide to invest in another company called Black Sands, along with fellow investor Mark Cuban.