Lessons All Professionals Can Learn from Hugely Successful Immigrant Women 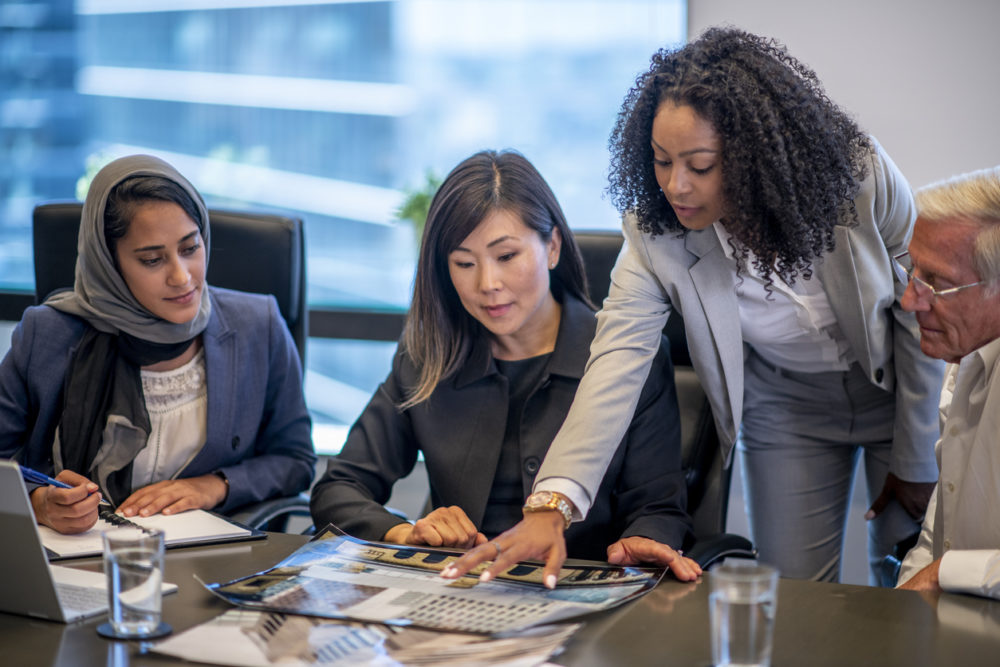 Being an outsider in the workplace is tough. Doubly so if you’re both a woman and an immigrant, two characteristics that can make your professional life a great deal more difficult. And when you’re trying to lead a team on top of having any type of perceived “outsider” status–people who share an upbringing you weren’t part of or set of meaningful experiences that you don’t have–it can seem impossible to feel the kind of engagement and respect to make professional headway.

But the outlook isn’t nearly as hopeless as it may appear, says Chinwe Esimai, Chief Anti-Bribery Officer at Citigroup–the first to hold the title in the bank’s history. The same ingredients that might seem at first to be insurmountable disadvantages for outsiders can instead become the fuel for success. Esimai has both been through it herself and seen it done amongst others in seemingly compromising professional circumstances.

Esimai spent 17 years in Nigeria before arriving in the U.S. A Harvard-educated lawyer, today she leads global initiatives to combat corruption and is a regular speaker at formidable international organizations like the United Nations. Throughout her career, she has met extraordinarily successful (and fundamentally extraordinary) aspiring female immigrants who have aptly leveraged their ostensibly prohibitive backgrounds to propel themselves forward in the workplace.

“It’s like being struck by lightning when you meet these women,” Esimai said. “There’s this instant kinship because of the shared experience and realizing we’ve all faced the same challenges.”

However, what was particularly striking about the expat powerhouses Esimai has met is that nearly all of them possess certain traits that have helped them excel in the modern American business environment (and beyond in many cases); ones that she hopes ambitious immigrant leaders today, both men and women, can take inspiration from.

1. We All Have That Instinct To Blend In. They Ignore It.

Some people spend an obscene amount of time and effort trying to stand out. Others don’t like attention. But as an immigrant, you don’t get that choice. You speak another language. Maybe you have an accent. You are almost certainly used to different foods, holidays and music. Ultimately, you carry a unique viewpoint that can’t help but draw attention and the first instinct of many is to downplay this difference, to hide it.

Except this can be a huge mistake. The truth is that successful immigrant leaders need to stand out in some way, and it’s been determined that powerful women tend to be even more assertive than men. Developing the confidence to do that means drawing from experiences unique to you and, most of the time, that’s a byproduct of how and where you grew up.

“I would not be able to lead the initiatives I have against bribery and corruption if it weren’t for my experiences making me the person I am…It’s be impossible,” Esimai said. Few of my peers understood how normalized some of these practices were and this gave me a unique perspective on how to develop solutions.”

How can you take advantage of what makes you different? For one, ensure that you are not the person holding yourself back. Remind yourself that you deserve to be there and be confident in your own experience and judgement. This will radiate outwards and affect how others see you. If you’re in a situation where you find you have special insight into a problem, and nobody in the room is saying what you think should be said, silence your inner critic and go for it!

Remember, influential leaders rarely get to where they are by simply repeating what everyone else does or amenably agreeing with what others say. They certainly don’t apologize for their own distinct thoughts.

ActioNet founder and Taiwanese immigrant Ashley Chen cites the quote that pushed her to build her $360 million business: “Action without vision is a nightmare, and vision without action is only a daydream.”

2. They Excise Self-Limiting Behaviors (And Excuses).

It goes without saying that immigrants or any perceived workplace “outsider” faces certain obstacles because of their unique circumstances. If you identify with these labels, you might not expect that one of the biggest of these can be the limits imposed by your own mind. But, there’s a particularly common one amongst immigrant women that those who break through have aptly transcended.

“Shyness is an epidemic,” Esimai laments. “There’s nothing inherently wrong with being shy, but it often stems from a lack of self-confidence that is almost always undeserved.”

Often, immigrants tell themselves that they don’t have the qualifications or language skills to speak up or volunteer for a project, cutting them out of valuable opportunities to advance their career. Studies find that doubts based on these self-inflicted stereotypes persist even when professionals are explicitly told otherwise.

If you have a similar shyness problem, remind yourself that you don’t need to fit every qualification for a role or project. You will learn what you need as you go. One of the best pieces of advice Esimai ever received was, “What you don’t know, you will figure out;” wisdom that’s been substantiated time and time again in her own professional experiences. And it’s an essential mindset to learn, because being willing to face challenges you’ve never encountered before so that you can overcome them is crucial to your growth, both as a professional and certainly to elevate to team leadership status.

But self-limiting behaviors are about more than just a lack of confidence. They are labels we apply to ourselves to justify certain actions we take—or don’t take. For instance, not attending that networking event you know you should go to because you’re an “introvert.” Or not correcting a team member’s behavior because you’re a “bottom-up leader.”

“All the great leaders I know engage in regular and rigorous self-examination,” Esimai continued. “They’re constantly thinking about where they want to be, what they want to achieve and how to get there.”

Do the same for your professional approach and goals at large, and take a hard look at the labels you put on your own character—whether negative or even self-inflating. Are any preventing you from being an effective leader? Often, we put undermining labels on ourselves simply because certain things make us momentarily uncomfortable, not because we’ll actually suffer harm from doing them. Reportedly, that feeling of discomfort mixed with excitement you sometimes get is often caused by new information entering the brain. The next time you say “no,” consider why you’re making that choice and what the upside would be if you course corrected.

3. They Define Themselves, Instead Of Letting Others Do It For Them.

You likely have experienced no shortage of people trying to put you into neat, nicely labeled boxes. Whether you’re an immigrant or a perceived outsider for some other reason, some might immediately make disparaging judgment calls about your level of education, ability, experience or other key factors for professional growth. Being a woman comes with its own set of assumptions, of which ladies likely need no reminder.

Many of the people you will meet, both professionally and otherwise, will invariably come to certain conclusions regarding how you should act and who you should become. This “well-intentioned” advice will come from coworkers, bosses and, of course, family. So, what is the key to effectively utilizing that advice … or knowing when to turn a deaf ear to those recommendations and judgments and plot your own unexampled course?

“Irrelevant or outright bad advice is inevitable,” Esimai noted. The clearest way to discern which feedback fits that description is already knowing where you want to go, how you intend to get there and believing you can make it so. Those doing something unusual must have thicker skin and dwell a little bit less on what people think of them. After all, it’s been found that only 13 percent of immigrant women pursue a profession.

In one noteworthy account, Indra Nooyi, former CEO of Pepsi-Co, lamented that her decision to attend Yale resulted in a family gathering where relatives debated whether or not she could go because sending an unmarried young girl off to the United States alone was considered scandalous. But, she stuck to her vision and became one of the world’s most powerful executives.

Ultimately, it comes down to believing that the best person to makes decisions about you, and for you, is you! Have confidence and even brazen certainty that the path you set out upon is achievable.

Perhaps The Most Important Trait Of All…

You don’t have to do any of the above alone, nor should you. A universal trait amongst the top leaders Esimai has engaged with is their keen ability to work with other people to achieve their goals.

It’s easier to embrace your differences when you have others who share it. This is the case with both male and female immigrants, women in general or even those with handicaps or anything that makes them look, feel or be perceived as different. You notice your own self-limiting behaviors faster when you have a friend who can give you that extra pair of eyes. A mentor or coach who has already walked a similar path to yours can give you hope and inspiration that you can walk it too.

Reach out to others. Tap into your unique advantages without apology. And believe that yes, you really can do it.

“There are so many brilliant people out there from diverse backgrounds that will go on to do amazing things,” Esimai assures. “They just need to embrace who they are, what they believe and in their ability to exceed expectations.”