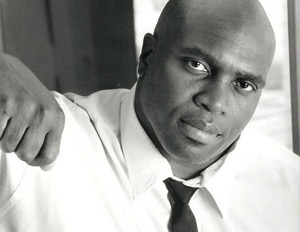 Lester Speight is a pretty big deal–both figuratively and physically. A former college football player and wrestler, he’s an imposing force on the field and in the ring but what’s been even more impressive is his performances on the screen. After bit parts in film (Any Given Sunday) and television (NYPD Blue), Speight made his big splash with his hilarious turn as Terry Tate “Office Linebacker”, Â a fictional character featured in a 2003 Super Bowl commercial for Reebok. The exposure from the popular spot led to a recurring role on Damon Wayans‘ My Wife and Kids but that was only the beginning of his success streak.

In 2006, Speight landed a voiceover job as Augustus “Cole Trainâ€ Cole for a Microsoft Game Studios’ Gears of War. The military third-person shooter was a breakout success, spawning two equally popular sequels, and catapulted Speight and his voice into the gaming spotlight. His fan base got an even bigger boost thanks to his performance in this past summer’s blockbuster, Transformers: Dark of the Moon. With Comicon taking place in NYC,Â BlackEnterprise.com speaks with Speight about his behind the scenes work in the gaming industry and his future plans.

How did you break into the gaming industry?

I broke in the video gaming world when Epic offered me the role of Augustus “Cole Train” Cole as part of the Gears of War franchise. At the time, I had no idea of how big this thing was. It was just another gig to me. But, this “gigâ€ has sustained me over several years. Let’s just say it’s the gift that keeps on giving.

As a voiceover actor, what makes your job unique to others in the gaming industry?

Doing voiceover work you sometimes can become the face of a game. Fans feel connected to you and they express their excitement towards you and your work via social media sites, websites and in person. They never think of you as the person you really are, they see you as they character you play and they get very excited. That’s special for me, because if it weren’t for the fans there would be no success for any of us. So, it’s exciting to me when I walk through a mall and someone whispers, “Hey, that’s Cole Train,â€ or any of the other characters I’ve played over the years.

Of all your career accomplishments, what are you most proud of?

It’s really hard for me to express which accomplish I’m most proud but I have my first three: The Terry Tate “Office Linebacker” commercials being the No. 1 Super Bowl commercial of all time, generating million of fans, and ringing the New York Stock Exchange Bell for Rebook was truly special. By the way, Rebook’s stock quadrupled the week following the debut [of the Tate commercial] during the 2003 Super Bowl. The Gears of War series has my heart as well, being part of the millions of dollars the games have profited and the success has been tremendous. Last, but not least, being a part of Paramount Studios’ first ever billon-dollar movie blockbuster, Transformers: Dark of Moon.

I’ve already added the producing hat to my big head because I love acting but I’m also a businessman destined to blaze his own trails. Being a successful producer in this business puts you in an elite class. There are stories that I want to bring to the big and small screen as well, like the story of Jack Johnson, the first-ever African American heavyweight boxing champion, [football player-turned-activist] Paul Robeson, [boxing great] George Foreman, and [saxophonist] Clarence Clemons, to name a few.

What was the biggest obstacle that you had to face while trying to move up in the industry?

Rejection is the number one obstacle in my opinion, you will be told, “No,â€ far more than, “Yes,â€ but you’ve got to know that no just means, “Not right now, my friend.” It doesn’t mean that you can’t do this business, there could be so many factors as to why you didn’t get a part or gig. Thick skin is key and you have to know that each rejection puts you a little closer to a, “Yes.”

What advice do you have for anyone interested in doing what you do for the gaming industry?

Don’t look to enter this industry for being a star. Stars are made not born, plus stars do fall. Meaning you have to hone your craft and learn the rules of the game. That takes time, and in this “I got to have it nowâ€ society rushing success won’t help you in the long run. Life is a marathon, not a sprint–don’t get in God’s way.

I remember not getting the part in the movie The A-Team, now if I would have gotten that part, then I would have missed out on Transformers. At the time I didn’t get it I was down, but I had to take my own advice cause I knew the good Lord has something bigger for me. Only coffee should be instant, don’t treat life like a cup of coffee, treat it more like a Thanksgiving dinner, it takes time to prepare one.