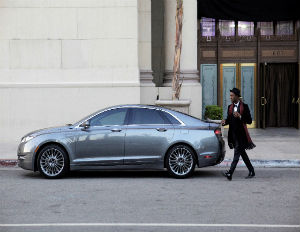 The Lincoln Motor Company continues to offer new avenues for potential customers to experience the brand and its vehicles.

Lincoln has teamed with recording artist Aloe Blacc and Interscope Records to create an interactive music video for his new song “Love is the Answer.â€ The video — produced by Legs and directed by Radical Friend — was teased during one of four Lincoln ad spots that aired duringÂ SundayÂ night’s Grammy Awards telecast and is available on theÂ Lincoln YouTube channel.

“Lincoln’s long-standing relationship in film is being transformed as we look to attract new audiences,â€ said Andrew Frick, group marketing manager, Lincoln. “By actively participating in this music video’s creative process, Lincoln is able to connect with open-minded individuals who want to understand the heritage of our brand while being engaged in unique and unexpected ways.â€

The collaboration with Blacc is Lincoln’s latest approach to surround cultural conversation of its vehicles and amplify the brand’s digital content by providing an interactive experience that allows consumers to uncover their own version of the video. Viewers are presented with a unique audiovisual experience that features the MKZ sedan. Various camera-view selections embedded in the video allow viewers to peel back layers in order to seamlessly switch from one angle to another.

“Lincoln is a classic luxury brand but reinventing itself in a very modern way, which I can relate to right now as an artist going through a transformation with my music,â€ Blacc said. “The way the digital experience was shot incorporates this new technology to directly engage with the individual so they become part of the story, and the results are beautiful.â€

The relationship with Blacc builds upon other Lincoln initiatives that involve the music and film industries. Lincoln’s “Hello, Againâ€ campaign, an initiative that launched last year with a re-imagined 360-degree, interactive online concert experience featuring award-winning singer/songwriter Beck, introduces consumers to a luxury automotive experience different from the competition.