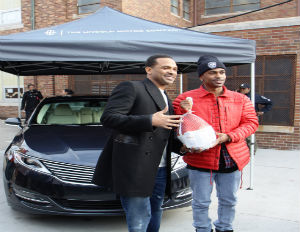 Lincoln Motor Company teamed with some of the biggest names in the worlds of sports and entertainment in support of the Cody Rouge Community Action Alliance to provide meals for those in need. Celebs gathered yesterday for the annual “All-Star Giveback: Thanksgiving Editionâ€ at Don Bosco Hall on the city’s west side.

The annual charity event distributed more than 600 turkeys, 100 hams and other holiday dinner items to Detroit residents on a first-come, first-served basis.

“All of these entertainers and athletes understand what it’s like to grow up in households of need,â€ said Tarence Wheeler of The Wheeler Group, event organizer. “They’ve all enjoyed success, but none of them have forgotten. They understand the importance of utilizing their success to help others in need.â€

Lincoln made a monetary donation to purchase turkeys and to benefit the Cody Rouge Community Action Alliance.