Linksys Aims to Envelop Your Home in Wi-Fi 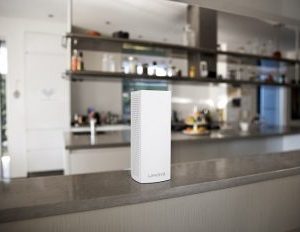 Instead of the typical, spider-like routers, with antennas sticking up that most of us are used to, Velop is a small device without any visible antennas that uses a form of wireless technology known as “mesh networking.â€ This technologyÂ blankets an area in Wi-Fi through the use of powerful internal hardware and software.

Mesh networking is a way to fight dreaded Wi-Fi “dead zones.â€ Velop is a tri-band router, capable of wireless speeds up to 2.2 gbps, and it is sold in packs of one, two, or three Velop devices, also known as “nodes.” The larger an area a customer wants to cover with Wi-Fi, the more nodes they would need.

Linksys also introduced a new setup appÂ to makeÂ Velop easy for the average user to install. The app uses Bluetooth to establish communication between multiple Velop devices in a home. The app uses animation, so a customer has vivid images to follow during setup.

“This is why I purchased Linksys in 2013. Â I had a vision of solving a huge problem in almost everyone’s life–slow and unreliable Wi-Fi,” says Chet Pipkin, founder and CEO of Belkin International. “Linksys has always been pioneers in home networking, and I knew this was the team that could innovate and deliver the ultimate Wi-Fi experience. Velop is a union of performance, design, and ease-of-use, and provides what everyone wants–seamless, reliable Wi-Fi. Linksys has set the bar for true mesh networking systems.â€

Velop also works with Alexa, Amazon’s voice-activated smart home assistant. The Linksys Velop Whole Home Wi-Fi is now available for pre-order through Amazon, BestBuy.com, and Linksys.com. The one-pack lists for $199.99; the two-pack for $349.99; and the three-pack for $499.99