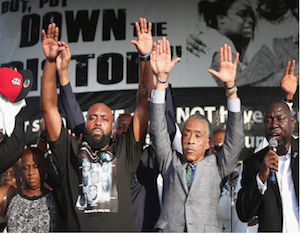 The event has reverberated from the streets of Ferguson, Missouri, to places all around the globe. President Barack Obama even commented on the situation, which came on the eve of two weeks of protests, arrests, and stirred a national debate on race, policing, and Black worth in America.

With the Brown’s parents calling for peace on the memorial day for their son, thousands are expected to fly in from all over to pay their respects. At a Baptist church in St. Louis, Trayvon Martin’s parents, Martin Luther King Jr.’s son and daughter to Snoop Dogg and Reverend Al Sharpton are expected to attend.

If you are unable to attend, yet still want to share the message to your family and friends, the service at Friendly Temple Missionary Baptist Church will be live streamed below. This is a very public and intensely personal moment, so comments will be disabled below. But for those who have children, are a child coming of age themselves, or just wants to say goodbye to a son whose death made him a household name, you can watch this celebration of life below.

Least Expensive States to Own a Car

Infographic: Ways to Tame Your Spending

FacebookTwitterYoutube
← Least Expensive States to Own a Car ← Infographic: Ways to Tame Your Spending
×
'