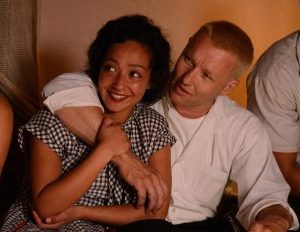 I fully learned about the political and cultural impact of the Lovings in Nancy Buirski’s 2011 documentary, The Loving Story. The documentary tells the story of Richard and Mildred Loving’s fight for interracial marriage in 1950’s Virginia. Their story connects us to the foundation of what prompted this uphill battle to push the system forward: love. This incredible story is the premise of Loving, a new film from director Jeff Nichols.

As we enter a new era of American politics and understand the need to further push civil rights, it’s worth noting that there are few Supreme Court rulings that have had the impact that the Loving case.Â The seed for “love winsâ€ and the fight for marriage equality started with Mildred and Richard. A woman of African and Native American descent and a Caucasian man that grew up in the same community eventually wed, and this violated theÂ  miscegenation laws of the time. This act set off a long journey of fighting for their right to return to their home state of Virginia as an interracial, married couple.

In Loving, Nichols’ approach to the couple’s story limits the courtroom drama, and sweetly allows the audience to participate in an arduous, yet hopeful, journey of a simple couple fighting against systemic limitations–all for love. Just as Buirski’s documentary makes the trial a backdrop, albeit a necessary component, Loving simply shows life according to the Lovings, with love the star.

Thanks to the rare footage from producer Hope Ryden and intimate photos taken by LIFE magazine photographer Grey Villet rediscovered via the documentary, the couple’s humanity is exposed and explored. Ethiopian/Irish actress Ruth Negga and Australian actor Joel Edgerton shine as the couple; their performances, quiet reflections of Mildred and Richard, highlight their individual strength with nuance. We see their adoration for each other, we learn of the similarities in background, we hear them laugh, and we see how they express sadness, frustration, and joy.

Negga connected to Mildred, and playing her reinforced things that she knew about humanity and overcoming adversity. “It made me consider what we are capable of and it made me in many ways less cynical. I fell in love with her tenacity,â€ she said.

As Mildred, Negga delved into the mindset of the times, tapping into the quiet strength, signature to black women that wasÂ necessary for survival, yet bolstered communities. “There was this deep strength and sort of steel innocence, especially when it comes to her family. I think she was naturally shy but she echoed those qualities,â€ she continued.

In fact, the history changing case of Loving v. Virginia was prompted by Mildred sending a letter to Robert F. Kennedy, explaining their situation and requesting aid. With their lawyers Philip J. Hirschkop and Bernard S. Cohen, the Lovings ultimately took their case to the Supreme Court. In 1967, the couple helped defeat the last remaining segregation laws in practice–the separation of the races in marriage.

“I think we forget that racism was reinforced by the law–Brown vs Board of Education for example–these were things not too far away. There was love between two people, but there were also property rights involved as well. So, it’s really very intricate,â€ Negga said. “She’s happy people are learning about the case and how it relates to the issues today. “I’m happy it’s shocking people; it’s kind of agitating people out of complacency. Sometimes just because they say equality [exists] doesn’t mean it’s being put into practice.â€

Ultimately, Loving shows what cannot be denied; the infallible love Richard and Mildred had for each other, their children, and their extended family. Richard and Mildred stepped out of their comfort zone to lay the foundation to what we know today–that love transcends all.

Moving into the next few years, may we all step out of our comfort zone to build on a foundation, so all may have equal rights.