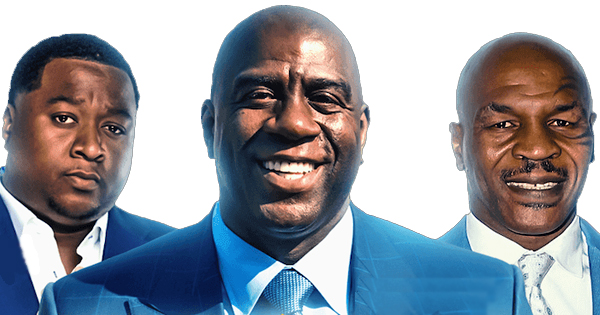 Sharing their competitive fire and strategies for success, professional athletes Earvin “Magic” Johnson and Mike Tyson have been confirmed as keynote speakers for the upcoming fourth annual Recession Proof Convention. Slated for May 27-28 at The Mirage in Las Vegas, this wealth strategy celebration from “Recession Proof” founder Marcus Barney will welcome an all-star line-up of attendees and speakers.

Johnson led the Los Angeles Lakers to five NBA championships before later serving as the team’s president of Basketball Operations. After contracting HIV (and later beating the virus), Johnson launched the Magic Johnson Foundation to help fight against HIV and AIDS and remains a well-known and well-loved broadcaster in addition to being a worldwide successful business mogul.

A former professional boxer, Tyson is known as one of the greatest heavyweight boxers of all time. He holds the record as the youngest boxer to win the WBC, WBA and IBF heavyweight titles at just 20 years old. His nicknames include “Iron Mike,” “Kid Dynamite” and “The Baddest Man on the Planet.”

“We couldn’t ask for more fascinating speakers at this year’s Recession Proof Convention. We know they will both bring fire and wisdom, personality and insight to their conversations on personal growth and wealth strategy,” Barney said.

“And that’s not all! Our speaker line-up this year is truly better than ever and our members will learn a lot and have a great time while doing so.”

Other Recession Proof Convention speakers include:

The multi-million-dollar Recession Proof program comprises financial literacy, personal and business funding, credit to cash strategies, coaching and more. Recession Proof reported a 2021 year-end payroll of $2.5 million and sales commissions of $1 million to his all-Black team of entrepreneurs. Further, Barney has mentored more than 10,000 others on building wealth, getting out from the crushing load of debt, and how to become successful entrepreneurs.

Exclusive to Recession Proof members, registration for the private event is available on Eventbrite.