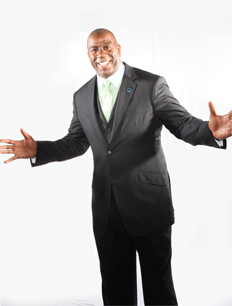 Earvin “Magicâ€ Johnson has scored big by creating a business fiefdom that serves urban America. His 22-year-old Magic Johnson Enterprises currently includes ASPIRE cable network; Magic Airport Holdings; Magic Workforce Solutions; and Los Angeles Dodgers part owner–his purchase last year made him the only African American with a substantial ownership stake in a Major League Baseball franchise. In the process, he has forged lucrative corporate partnerships; provided employment for thousands of African Americans; and built a powerful brand. In this interview with CBS Sports Analyst Clark Kellogg at the Black Enterprise Entrepreneurs Conference hosted by Nationwide in May, the superstar shares his formula for success.

When did the business seed get planted in your life and mind?
When I got my first job at 16, I had to clean seven floors in an office building. I would get to that seventh floor and bust in like I was the CEO. I would recline the seat and put my feet up on the desk and start dreaming that I was the CEO, and then I would hit the intercom button like I was really the CEO and say, “Aisha, can you bring me some coffee and doughnuts and the day’s special?â€

What started that dream, though? Was it somebody you saw?
It was two African Americans in Lansing, Michigan: Joe Ferguson and Gregg Eaton, who showed me that we can own buildings and car dealerships. I didn’t know we could do that. They became my mentors. You have to have mentors. That’s very important. Earl Graves Sr. and I owned a Pepsi distributorship together, and he became a mentor to me. As a young athlete, I didn’t know a lot but I watched his every move and asked him a lot of questions. I think it’s important that we have guys in our community that can become mentors to us or that we can get information from. So these two guys provided information and made it possible for me to visualize that one day I could become a businessman.

You had phenomenal success as a basketball player. But when did you start to implement the plan that led to your becoming CEO of Magic Johnson Enterprises?
Early in my career. You have to, first of all, get all the information and then start building your business strategy. It is so important because your strategy is everything. How are you going to drive ROI? How are you going to implement your plan, execute it, and then who is going to manage that? A lot of people looked at me as a dumb jock. I could play basketball but I couldn’t run a business. So that worked against me because a lot of people out here say, “Oh, you had the money already.â€ Well, Earl [Graves] taught me to use other people’s money. Now I’ve got to go out and say to banks, “Hey, I want to borrow some money so that I can go to the next level because it’s all about growth.â€ I got turned down 10 times, but it’s not the fact that you are getting turned down, it’s that you keep going. And finally somebody said yes to me and believed in my vision and my business strategy and then we took off. That bank is very happy. They made a lot of money. The 10 that turned me down, they’re so sorry.

Was your desire as a businessman to really impact urban America?
Yes. Where I came from, where I grew up, I wanted to impact urban America. I wanted to show people, here we are, African Americans, who have about a trillion dollars in spending power; Latinos have about a trillion dollars in spending power–that’s a lot of disposable income. We love to shop. We love to do things. The problem is a lot of retail is not in our community. We’ve got to drive outside of our community and spend our money. So I said, “Wait a minute, the demand is there–let me build it right in our own community.â€ I started off with the movie theaters, and our per capita was some of the highest in the industry with the Magic Johnson Theaters, a partnership with Sony.

I’m a big believer in partnerships. A lot of times we want it all for ourselves. We want 100%, and that becomes a problem. Look, if I can get 50% of something I’m good. See, that check is still good, right? So you get somebody that has the expertise that you don’t have and then you guys come together and build something, a successful business. You can learn from that person while also you can teach that person something. We come together and make a lot of money… and then we put people in our community to work.

You talk about teamwork and leveraging partnerships and different skills. How much did your basketball background influence that line of thinking?
Well, point guard, being a leader, but also working with others, passing, paying attention to detail–that helped me in my business today. Being a point guard I had to know not only our plays but the opponents’ plays. I took that same work ethic to the boardroom. I took my passion for winning–because you know I’m crazy about winning.

A Good Job Is Just the Beginning