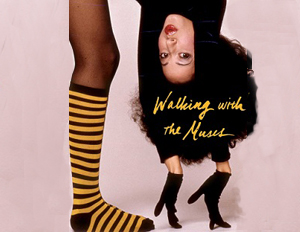 Before Naomi Campbell’s signature runway walk became worth millions there was Pat Cleveland, one of the first black supermodels in the sixties and seventies. A vivid account of the fashion scene and life adventures of Cleveland comes from the memoir,Â Walking with the Muses, publisher Simon and Shuster. Cleveland writes about being a tall, skinny, and mixed-race girl (“not black enough to be black or white enough to be whiteâ€) who grew up during the 1950s in East Harlem, New York. AÂ VogueÂ editor discovered the then 14-year-old on a subway platform, chased after her, and set her on the path to modeling. At age 18, she was signed by the premier agency of that time, Ford Models.

Described as a “walking girl,â€ Cleveland was in high demand. Her singular style turned heads on the runways of New York, Paris, Milan, and Tokyo. Her theatricality won the hearts of fashion designers like Valentino, Oscar de la Renta, Diane von Furstenberg, and Yves Saint Laurent.

Cleveland’s book notes New York was glamorous and gritty at the same time; “a place where people like Andy Warhol and Halston, as well their muses came to pursue their ambitions, and when the well began to run dry, they darted off to Paris.” It paints her story as larger than life; one minute, she’s in a Harlem tenement making her own clothes, the next she’s about to walk Halston’s show alongside fellow model Anjelica Huston. In New York, she struggled to secure her first cover of a major magazine, but in Paris, became the toast of the town.

The New York Times reports, “when she first appeared on the scene, Cleveland was a type of model people hadn’t seen before, ” according to Contributing Editor at Vogue (and notable African American in the world of designer fashion), AndrÃ© Leon Talley. Cleveland often described herself as,Â “A skinny girl from Harlem with no boobs and a frizz of hair.”

“Pat was never a parody of the high-class model,â€ Talley went on to say. “The way she walked, her sense of theatricality wasn’t something she acquired. Whether she was being zany, goofy Pat or ethereal, ephemeral, gossamer-as-the-wings-of-a-butterfly Pat, what she did was natural to her. It came from within.â€

The New York Times writes that Cleveland was transformed into a star on the evening of November 28, 1973, when she was one of 30 black models chosen to participate in a benefit runway show held at the Palace of Versailles outside Paris. While in front of 800 guests, many of whom were prominent or titled, she took to the stage spinning and twirling.

The 65-year-old Cleveland discusses the racial discrimination she experienced, still prevalent. She left New York for Paris, vowing to remain there, according to The New York Times, until a black woman appeared on the cover of Vogue. Beverly Johnson earned the distinction in August 1974.