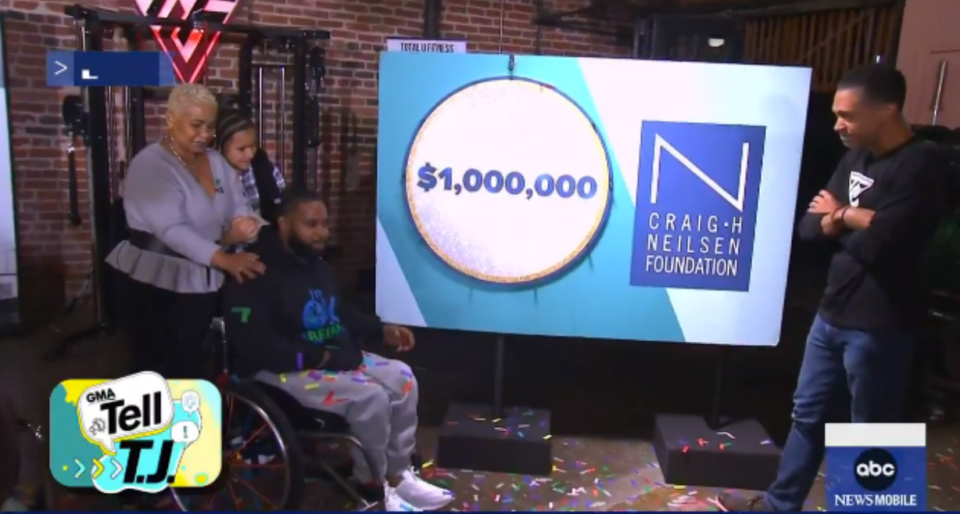 What could’ve taken the life of this shooting survivor, gave him hope and another reason to live.

Wesley Hamilton, a resident of Kansas City, Missouri, founded Disabled But Not Really (DBNR) after being shot twice in the abdomen and paralyzed in 2010. The non-profit organization focuses on providing equal access to the underserved disabled community through fitness, wellness, and mental health.

“The energy that he brings to the class is unmatched,” Trey Matthews, an athlete at DBNR, said about Hamilton when they’re in the gym. “It’s actually a place where I feel like I belong.”

Hamilton’s hard work paid off when he was surprised with $1 million toward DBNR on Good Morning America. The gift came from the Craig H. Neilsen Foundation, a non-profit that works to change the world for people living with spinal cord injuries.

“Thank you, everybody for this and believing and watching the journey,” Hamilton said after he received the donation.

“It’s always been about the people we’ve been serving. I’m grateful…This doesn’t seem real. If you know my story, you know where I come from, it doesn’t seem real, but it gives my people hope and that’s all I wanted,” he said.

He said he has plans to put some of the funds toward a project his organization has been working on.

“We just launched a mobile gym and our plan is to take what we’ve been doing and spread it across the country,” he said.

After the spinal cord injury changed his life 10 years ago, Hamilton said he became deeply depressed and contemplated suicide. The single father changed his mind when he thought about his daughter, Nevaeh.

“My dad’s a superhero to me because he helped me out. He motivates me,” Nevaeh said. “My dad is literally the most amazing person I know.”

Because Hamilton chose to remain hopeful, he’s an inspiration to many.

“The man who tried to take my life gave me life. I’m living my purpose and everybody is seeing it,” he said. “Follow your dreams despite the circumstances that happen to you.”