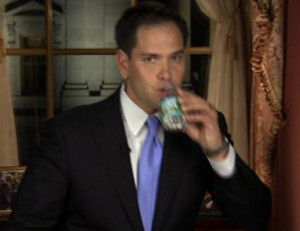 After President Obama’s State of the Union address last night, Marco Rubio was charged with the task of issuing the Republican rebuttal. Midway through his speech, the Florida senator awkwardly took a tip from a tiny Poland Spring bottle, which set social media on fire. Within the hour #watergate was trending, tiny Poland Spring Meme’s went viral, and a video of the senator’s “Dry mouthâ€ had been uploaded to Youtube. Even Marco Rubio joined in the fun, tweeting a photo of the bottle from his own account.

The Poland spring social media accounts however remained oblivious to the fact that their product had gone viral and was now trending. In fact, a quick check of the brand’s official twitter account revealed its most recent tweet came in January, 2011. By the time the brand’s Facebook page had been updated with a photo of a tiny bottle of Poland Spring with the caption “Reflecting on our cameo. What a night!â€ nearly 14 hours had passed by.

This blown opportunity demonstrates how speed, timing and being pro-active should be necessary pieces of any brand’s social media strategy. Poland Spring’s failure to capitalize on last night’s events stand in stark contrast with the social media dexterity demonstrated by Oreo & Tide during the Super Bowl power outage earlier this month. Â When the lights went out in the Superdome, both brands bought promoted tweets, created witty ads that went viral and used other audience engagement techniques to use the unexpected event to leverage their brand.